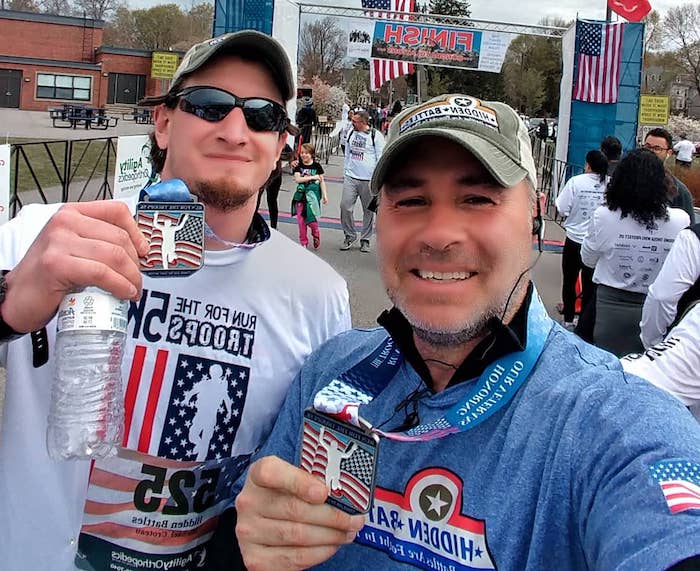 Scott Hyder served in the U.S. Army as a combat engineer for 10 years and then as a police officer. From deployment to Kosovo during the Balkans Peacekeeping Campaign to responding to crises back home, he was always on alert and helping others. But it wasn’t until he lost his brother that he realized how serious the struggles with PTSD, depression and mental health are for veterans and first responders.

“I began Hidden Battles Foundation in 2017 after the death of my brother, Nicky, a retired corrections officer, from suicide,” said Hyder, who is a member of VFW Post 10722 in Pelham, New Hampshire.

“I, too, was suffering from depression and PTSD from my military and work life. Knowing that veterans and first responders aren’t the best at vocally searching for help, I began to think of activities to build a community of like-minded individuals and develop a peer support network that would allow participants to open up or just feel safe and comfortable.”

The organization holds a wide range of events to provide veterans and first responders with opportunities to find connections and therapeutic activities. The programs also are open to an individual’s spouse, partner and family, and are offered for free. Hidden Battles Foundation has hosted everything from cooking classes and yoga to rucks and movie nights as well as sponsored vets for equine therapy.

In 2019, more than 1,000 people were served by over 50 events. Hidden Battles Foundation faced challenges in 2020 once the pandemic hit, but made adjustments. They were able to hold a number of virtual events and maintain some outdoor activities.

Hyder is committed to seeing the organization continue to serve those who need it because he sees the difference it makes. He recalls a thank you note from a state trooper’s wife who attends many events with her husband. She got him to reluctantly attend a cooking class, but now they come regularly and invite other first responders. She’s grateful they found people who understand their stress and can help relieve it in a positive way.

In the case of one Army veteran, attending an event turned into a deeper relationship and giving back.

“When Matt returned to his hometown, he didn’t have an understanding support unit. He attended our Veteran Appreciation Night at a major league baseball game,” Hyder said.

“Matt sat and talked with staff about our mission and how we help with mental health issues. Two years later, Matt continues to attend almost every event and recently joined our executive board. With Hidden Battles, Matt has found his community and has reached out on many occasions when struggling.”

Hyder is proud to help “defend our defenders” in his new mission. He’s thankful for the donors and volunteers who make the work of Hidden Battles Foundation possible and hopes to serve fellow veterans, first responders and their families for years to come.