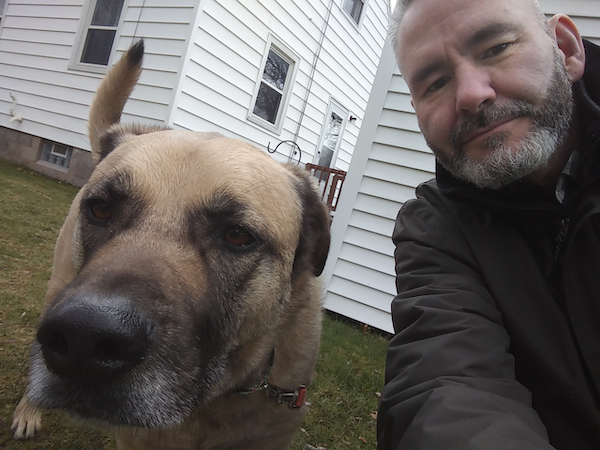 Keith “Doc” Dawson is #StillServing by helping veterans find the support they need after leaving the military. He’s also working in the intensive care unit of a hospital while going back to nursing school. Through everything he does, Dawson is grateful for the four-legged friends who helped him through his own struggles and allow him to continue a life of service.

Dawson spent more than 25 years in the military, mostly in the U.S. Army after several years each in both the Coast Guard and Air Force. His duties ranged from law enforcement and fire protection to serving as a flight medic. After returning home to New Hampshire, he found it difficult to transition to civilian life. Dawson moved to New York and met Hanz, a service dog, while seeking help with substance abuse and homelessness.

“Hanz lived at Richard’s House, part of the Veterans Outreach Center in Rochester. This was my residence for two years, and I grew fond of him. Hanz was trained specifically to be a service dog for all of us living there,” recalled Dawson.

“I still visit him when I have a chance. He was my calming best friend through a lot of chaos in my life.”

As he got back on track, Dawson also realized the importance of organizations such as the VFW. He is a Life Member and served as an officer at a VFW Post in New Hampshire. Now he tells fellow veterans about the ways the VFW made a difference for him.

“I’ve helped other veterans with their compensation and benefits retrieval and shown them the rewards and support they would have if they joined an organization like the VFW,” Dawson said.

“I explained how better they would be served. In turn, many of them understood the idea of ‘paying it forward’ to other brothers and sisters in need.”

In addition to the camaraderie and support found in the VFW, Dawson credits his partner and her dog with helping him maintain his mental health and stability.

“When I moved out on my own, I was lucky enough to meet a great woman, my ‘Zen,’ and she became my partner in life. She has her own dog, Sammy, and he adopted me as his buddy along the way,” said Dawson.

“He calms me down when I’m having a chaotic moment in my day. The responsibilities of taking care of Sammy make me focus on a life other than my own. His love and affection come without a need for payback. He expects nothing in return except to be taken care of, which is easy.”

Sammy’s natural inclination to function like an emotional support dog, as well as the experience with Hanz, has Dawson considering a dog to assist him with ongoing challenges of post-traumatic stress. He believes more veterans can benefit from the support animals provide.

“When a veteran that has seen or been involved in combat is transitioning to civilian life, the needs they have are simple: no judgement, no retaliation for moods and the unconditional love and care an animal gives,” Dawson stated.

“A dog or other animal in a veteran’s life is a great addition to the healing process.”

With man’s best friend by his side, Dawson is motivated to take steps forward each day, finish his education, and keep serving others. He hopes his story is an encouragement to anyone else who might be struggling.

“I have found if you lead people through your eyes of success, they become successful in their own paths – whether it be personal, career or just life itself. Perseverance has been the key for me, and I pass that on to as many people as I can, military and civilian alike,” said Dawson.

“Helping people, specifically the veterans that have walked in my shoes, makes my heart smile.”