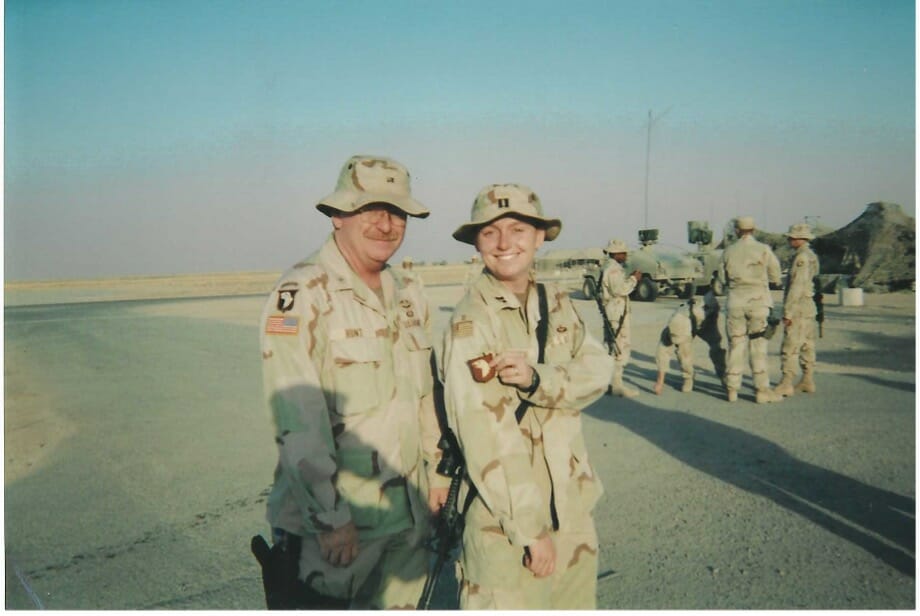 Nicole Bisacchi’s father was drafted in 1966. After Vietnam, he went on to serve until 2008, including in Iraq. Her sister enlisted and served 13 years in the Air Force. Years before, her grandparents were in the military too. Although there was a family precedent to serve, Bisacchi did not think the same path was open to her.

“I always wanted to join the military out of high school but was scared to tell anybody,” she said. “I felt pressure to go to college because I had good grades and was able to play sports at a college level.”

Bisacchi did not realize all of the options available to her, including attending one of the five United States service academies.

“When I was in high school, I lived in a rural area. Nobody from there had gone to a service academy,” she explained. “I didn’t even know what they were until I was a senior.”

Bisacchi scored high enough on her college entrance exam that she received a brochure about the service academies. Suddenly, a new world of possibilities opened to her.

“That brochure was the only reason I got to follow my dream. It showed me that I could be in the military and go to college,” she said.

She joined the Army as a West Point (USMA) cadet in 1995. After graduation, Bisacchi was stationed at Ft. Bragg and then deployed to Iraq. While overseas, she had the rare opportunity to connect with her family.

“My husband and dad were in Iraq at the same time, and we got to see each other! My dad was a big inspiration for me to join the military,” she said. “I enjoy having this bond with him. We both even have 101st combat patches!

“Now, I try to make a ‘dad-daughter’ night at least once a month to go to the VFW together and hang out.”

In addition to belonging to her local Post, Bisacchi was looking for another way to connect and give back.

“I missed serving, so I began volunteering for USMA admissions to help candidates with their applications,” she explained. “I love talking to high school students! I’m so inspired seeing them motivated to do great things.”

Bisacchi discovered an opportunity that would allow her to continue helping young people and revive her military career.

“I found out that I could be in the Army Reserve and be assigned to USMA admissions, so I started the process to re-enter the Army after a 16-year break in service,” she said.

Bisacchi is grateful for this next chapter and the chance to help others begin to write their own stories of service.

“I now understand that there are so many opportunities and ways for people to have it all! It’s just about making sure they know what’s available to them,” she said. “I get to help high school students understand what the military can do for them and how they can best fit into any service. I love it!”

“It’s rewarding because the students are so humble and grateful for the opportunity,” she said. “I get so emotional for them when I get a call telling me they were accepted and hearing how happy they are.”

Bisacchi is proud of her service and thankful to have realized all her options before it was too late. She does not want another young person’s success to depend on receiving a brochure in the mail.

“A service academy is not a perfect fit for everybody, but it is a shame that not everybody knows these opportunities exist,” she said.

“I don’t want anybody to lose out on a dream or life-changing choice just because they don’t have the knowledge. I explain the enlistment opportunities — ROTC, medical routes and the various military branches — to all the candidates. They all want to serve our nation. Finding the best fit is the best way to inspire them to do so.”