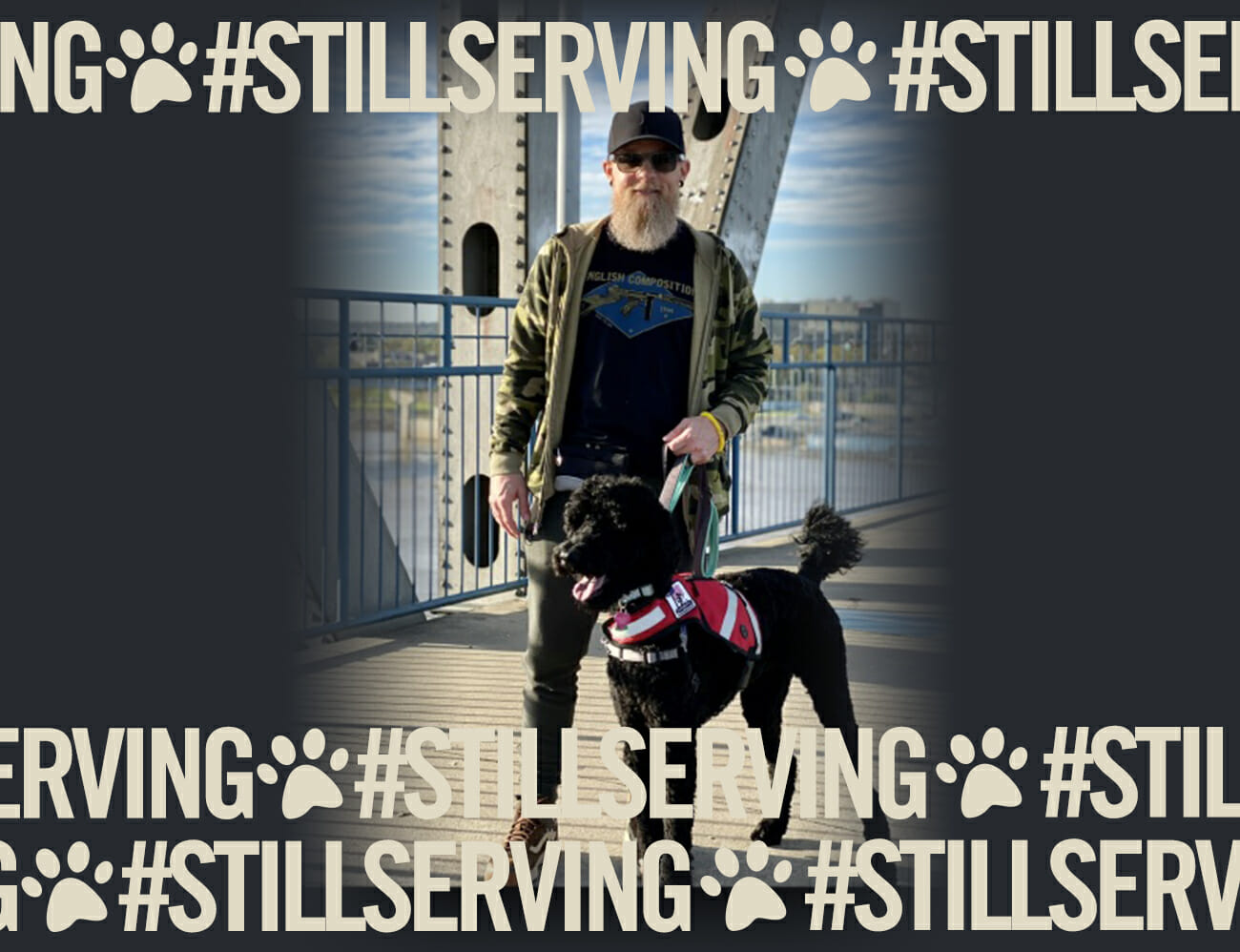 After he retired from the military, veteran Dustin Brown did not want to leave the house or socialize.

“I dreaded going to the store or any place with large crowds or gatherings,” he said. “And I withdrew from almost all my family and friends.”

Hoping to live a more peaceful life and restore relationships, Brown entered a service dog program. After a year-and-a-half, he completed training, and today, his dog Sophie is a constant source of strength and comfort.

“She allows me to leave the house and provides a physical barrier between me and new people,” he explained. “If I have an anxiety attack, Sophie will lead me out of the situation. She has been a life changer for me.”

Together, Brown says he and Sophie are #StillServing the community by spreading awareness about the importance of veteran service dogs.

“People always ask if Sophie’s a service dog when we’re out. I feel like it’s my duty — and honor — to inform and educate the public every chance we get,” he said.

Having faced skepticism from others who do not understand the role of a service dog, Brown wants to debunk any myths.

“There are those who think it’s just a way to bring your pet everywhere with you,” he said. “I take that as an opportunity to impart some knowledge.”

Brown hopes to ensure such misunderstandings do not negatively impact another veteran’s experience or keep them from seeking the support of a service dog altogether.

With Sophie by his side, Brown regularly visits the Little Rock Air Force Base to speak directly on the topic with unit members.

“It’s a great way to get back into the military community since retiring,” he explained. “And it lets Sophie touch people’s lives.”

Besides helping Brown reconnect with his community, he continues visiting because he knows how much other veterans can benefit from the healing effect of service dogs, recalling a recent experience.

“Sophie and I were at the VA for an appointment, and there was a fellow veteran in the waiting room. He was just looking down at the floor and not engaging with anyone,” recalled Brown.

Sophie is trained to respond to Brown when he’s anxious, depressed or panicked. But in this instance, he noticed that the dog’s attention was elsewhere.

“She slowly started to scoot toward the veteran, and I kept correcting her to stay. Then, it dawned on me that Sophie was alerting on him,” Brown said. “She got next to him and laid her head in his lap. I saw his shoulders relax as if a massive weight had been lifted. That’s the power of a service dog!” “He looked down at Sophie and rubbed her ears and patted her head until his appointment,” Brown continued. “When the veteran got up, he pulled down his mask and had a big grin on his face. All he said was ‘thank you,’ and those were the only words that needed to be spoken.”

If you’re a veteran who is #StillServing with your special dog, share your story at todaysvfw.org/stillserving-dogs.