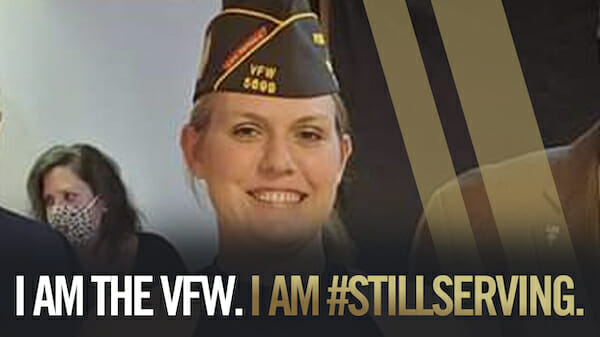 “The VFW is an organization that cares for, fights for and supports all Veterans of Foreign Wars. This is why I’m proud to say ‘I am the VFW,’” said Lela Bremen, a VFW Life Member who is #StillServing as the first female Post Commander at VFW Post 5699 in Ocean Springs, Mississippi.

“I am the VFW because I wake up every morning with a goal to impact at least one veteran’s life that day. The VFW gives me the ability to connect with so many of my fellow veterans and be a part of the support system we all miss when we separate from the service.”

Bremen served in the U.S. Army for more than 10 years and transitioned out of the military in 2016. She completed a short fellowship working for a member of Congress helping veterans in Mississippi but felt lost when it was over. Bremen joined the VFW but didn’t really want to participate – until former Post Commander Pat McCarthy fixed her car’s brakes when she was without money for repairs and changed her mind.

“An auxiliary member suggested I call Pat since he works on cars. I’d met him once. Without hesitation, he said to bring my car over. He helped me with the cost of parts and didn’t expect anything for the labor. He asked what it would take for me to start attending meetings and getting involved,” Bremen recalled.

“I went, truthfully having no intention of returning. But I was accepted. I was the only woman and was treated the same as everyone else. I knew immediately this was my family. I never missed a meeting after that and was elected Commander seven months later.”

Serving as the first female Commander for Post 5699 is a special honor for Bremen, and she’s also taken on the roles of Post Service Officer, Mississippi District 1 Service Officer and the State of Mississippi Women’s Veteran Service Officer. She is grateful to have found a new purpose through leading the Post’s efforts to care for veterans and make a difference in the community.

“A child in our community has leukemia, so we hosted a blood drive and a silent auction. We doubled the expectations on the amount of blood and we made several hundred dollars to give to the family towards expenses.”

Bremen also got to work with a young woman who had participated in Patriot’s Pen and wanted to include the Post in her Eagle Scout project. The project included designing, building and donating a flag retirement box to the Post as well as leading a ceremony to properly retire more than 300 American flags. Bremen is proud that it helped the 17-year-old become the first female Eagle Scout in Mississippi.

From reconnecting members with the family of Mark Seymour, the namesake of Post 5699, for the Post’s 75th anniversary to seeing her son develop a desire to help veterans, it’s meaningful for Bremen to continue making sure the Post both welcomes families and feels like a family.

“When other veterans see us out in the community having fun, interacting with different age groups and hosting activities, they want to join us. I always remind them we’re on Capitol Hill fighting for our fellow veterans’ rights and proper benefits. We are the voice for veterans. No veteran is alone. We’re here for all,” Bremen said.

“I missed the camaraderie and bond with service members after I separated. Now I begin each day with a smile on my face knowing that I am part of an organization of veterans who care and who want to help one another and change lives.”