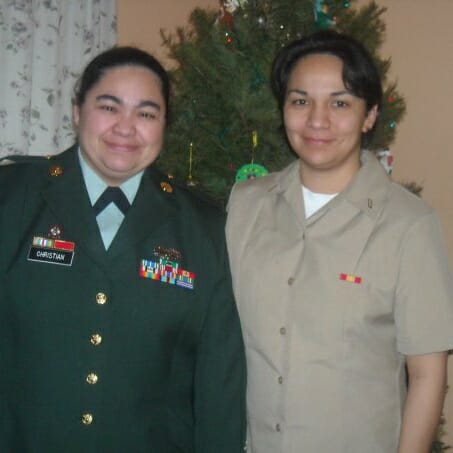 Angelina Christian served with the U.S. Army for nearly 20 years, including two deployments to Iraq. Her training gave her the skills to accomplish her mission abroad, but she didn’t know how to manage to return home after combat injuries ended her military career.

Struggling with physical and mental challenges, Christian grew frustrated when resources weren’t easy to find. New service opportunities and engagement through video games provided her with purpose, an outlet to begin dealing with issues such as PTS and the motivation to pursue a master’s degree in social work.

Christian currently resides in Pahrump, Nevada, where she’s #StillServing as a member of VFW Post 10054. Discovering a new mission began because people kept asking her for help as she found her own path forward.

“At first, it was a phone call or two from former soldiers asking for resources or references to help service members, friends or family. I knew which direction to point them,” recalled Christian.

“Now I’m doing this on a slightly larger scale. I just received training in suicide intervention, and I volunteer with the VFW. I’m a certified veterans advocate for the state of Nevada. In addition, I help find resources and services that could assist someone such as homeless shelters and food banks, driving people there if necessary.”

Christian’s mission also is a very personal one. She has been able to take better care of herself and offer support to her uncle who has battled drug and alcohol abuse as a homeless veteran.

As part of her journey toward healing, Christian dove into video games. She hopes to start a program with veterans and online gaming once she’s a licensed social worker.

“It’s group therapy, believe it or not, but it’s not named group therapy. Sometimes all we need is to sit around with somebody who has been where we’ve been,” Christian stated.

Through her experiences and studying recent research, Christian believes video games can be a way for service members to cope with PTS and other psychological and mental injuries. It offers interaction without judgment or the pressures of face-to-face settings.

“Mentally, some of us stayed overseas. We never came home. By connecting with other veterans through social media and video gaming, we’re realizing we’re not alone. We’re realizing there’s someone else to talk to, to reach out to,” said Christian.

“I want to be available to my fellow veterans so they can find the tools to carry on with their futures.”

Find out more about the VFW’s #StillServing campaign or to share your story.