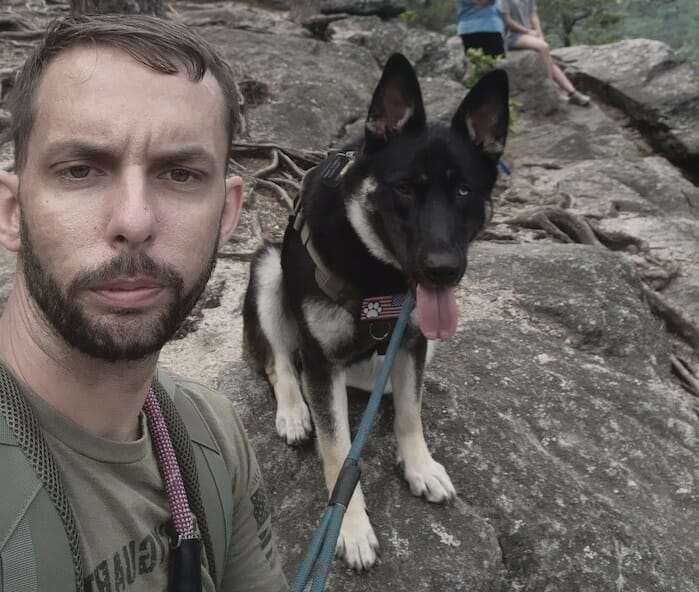 Most of Forrest Perry’s years in the military were spent at Fort Stewart in Georgia. But his service did include two deployments — one to Iraq, another to Afghanistan.

In Afghanistan, he was in charge of sling load operations for Shank Airbase. In addition to the demanding job, Perry was stationed in a notoriously dangerous location.

“It had the moniker of ‘Rocket City’ due to incoming fire multiple times a day,” he said.

About halfway through his tour, Perry was injured. This past February, he adopted a service dog to help manage his anxiety and Post Traumatic Stress (PTS).

Domino performs specific tasks to comfort Perry when she notices him becoming anxious. She also helps Perry socialize with friends and family as well as meet new people.

“She helps me go to public events and be more proactive in my children’s lives,” Perry said. “She even made a vacation to Orlando’s Universal Studios a lot more manageable.”

The duo is #StillServing by increasing awareness about the benefits that animals like Domino can provide veterans.

“Service dogs are a great alternative to medicine, but they are a severely underused service,” Perry said.

He believes there are too many dogs awaiting adoption in shelters, including many at risk of being euthanized. At the same time, it feels to him as though there are just as many veterans who could benefit from having a companion like Domino if they had access.

“There are veterans who feel like they have nowhere to turn for help or their treatments aren’t working … ones who feel alone and lost. This is a service to get behind, but resources are few and far between,” he said.

For instance, Perry explained that from where he lives, it takes more than three hours to reach the nearest service dog training program.

“Most people can’t travel one or two days a week over an eight-month span to complete the training for their service dog,” he said.

Whether by improving legislation or providing incentives to trainers to make their services more available, Perry hopes more men and women have better access to service dogs sooner rather than later. He knows the difference the dogs can make in a veteran’s life.

“Domino has helped me go to my PTS meetings and functions to come to terms with my traumas,” he explained. “And she has helped bring people into my life that I call true friends that I otherwise would not have met.”