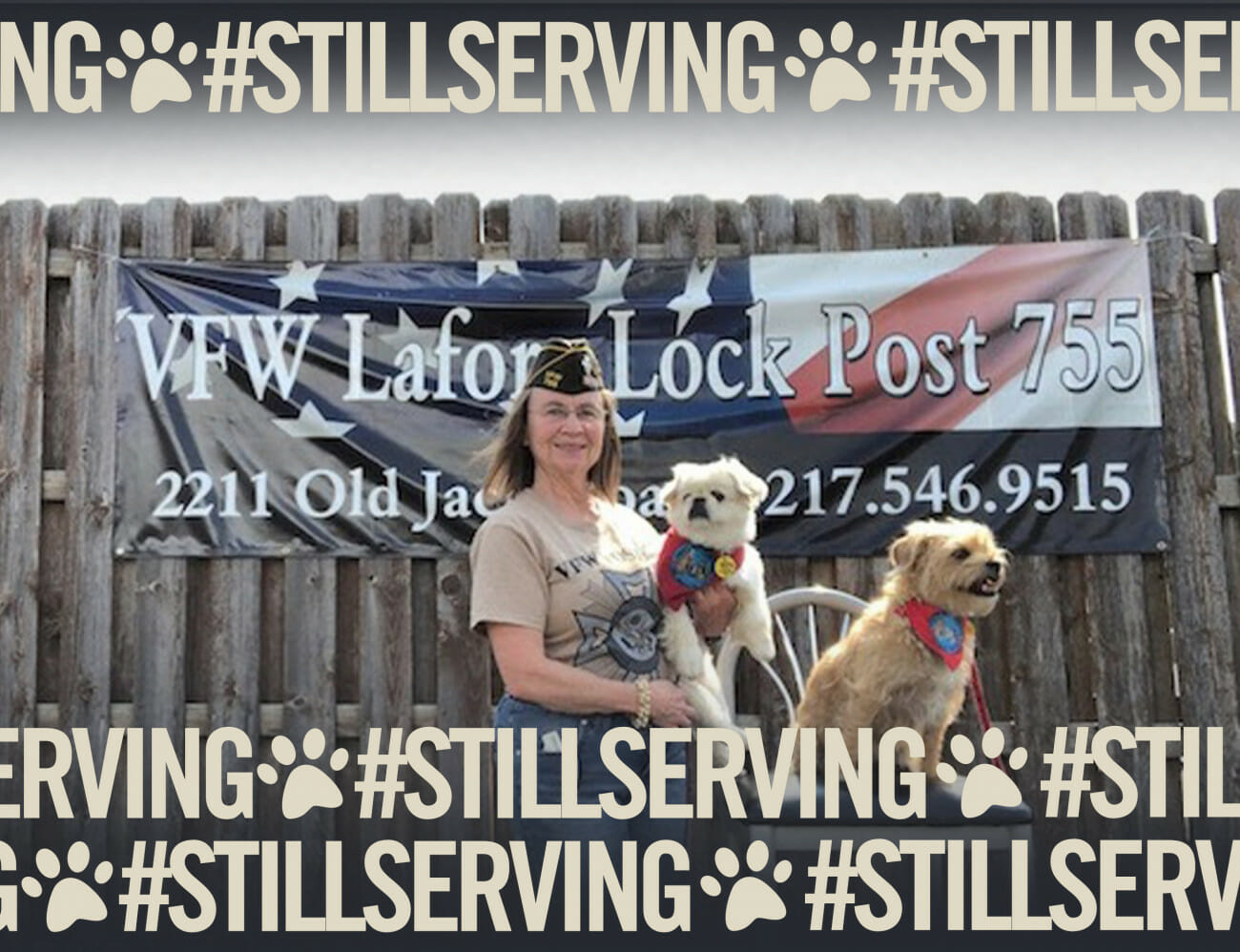 Rosemary Connolly is #StillServing as a member of VFW Post 755 in Springfield, Illinois, and as a therapy dog handler.

Connolly served in the U.S. Air Force for 22 years and was deployed to Saudi Arabia with the Airborne Warning and Control Squadron, known as AWACS, in support of ELF One operations. After her retirement from the military in 1995, she still felt the call of duty and has devoted time to serving fellow veterans and citizens through involvement with a number of community and veterans organizations. She now has two four-legged friends who’ve joined her mission to help others.

In December 2014, Connolly adopted Sophie, a white Pekingese, from a local animal shelter. She says it was really Sophie’s idea to be a therapy dog.

“When I took Sophie for a walk, she wanted everyone to pet her. She wanted people to drop their yard work to give her affection. That’s when I knew she had a special calling,” recalled Connolly.

“She was so friendly and outgoing, and I couldn’t satisfy her thirst to be petted. I thought about therapy dogs I’d seen photos and videos of and thought maybe she needed a few more hands and I was to be her driver.”

Connolly became a therapy dog handler in 2015 and loves bringing joy to someone by giving them time with man’s best friend, especially residents of assisted living facilities.

“Sophie loves her job. Since she’s a lap dog, I use a nursing pillow to put on the resident’s lap. I often tell them Sophie has super powers. You put your hand on her heart and that power will transfer to the hand, up the arm and into the heart,” Connolly said.

In 2018, Connolly adopted Amber, a Border Terrier mix, with the intention to train a second therapy dog. Amber is not a lap dog like Sophie, but her talent is performing tricks and she delights the people who get to engage with her playfulness.

Amber and Sophie are certified through Therapy Dog International (TDI) and have been tested by an evaluator for behavior and temperament. Sophie has earned the TDIEVA title which stands for TDI Exceptional Volunteer Achievement: 350 Total Documented Visits. Amber has the TDIA title which means TDI Active: 50 Documented Visits. Instead of vests or harnesses, they wear a scarf or bandana with the TDI logo on it and a collar tag.

“This is to make more of the dog’s petting area available for people to cuddle with. Additionally, the use of a service harness can confuse a therapy dog with a service dog,” stated Connolly.

As a member of TDI, Connolly’s primary objective is to provide comfort and companionship by sharing her dogs in hospitals, nursing homes or anywhere else they might be needed. Though very different from service dogs, Amber and Sophie’s volunteer work as therapy dogs can increase emotional well-being, promote healing and improve quality of life. Connolly is grateful to have a role in making this possible.

“Not everybody can care for a dog. This is where the therapy dogs come to the rescue. Some assisted living facilities may permit residents to have their own pet while still getting needed care. Others do not. I have two therapy dogs that I enjoy sharing to bring a smile to a person’s day,” Connolly said.

“If only you could see the smiles!”