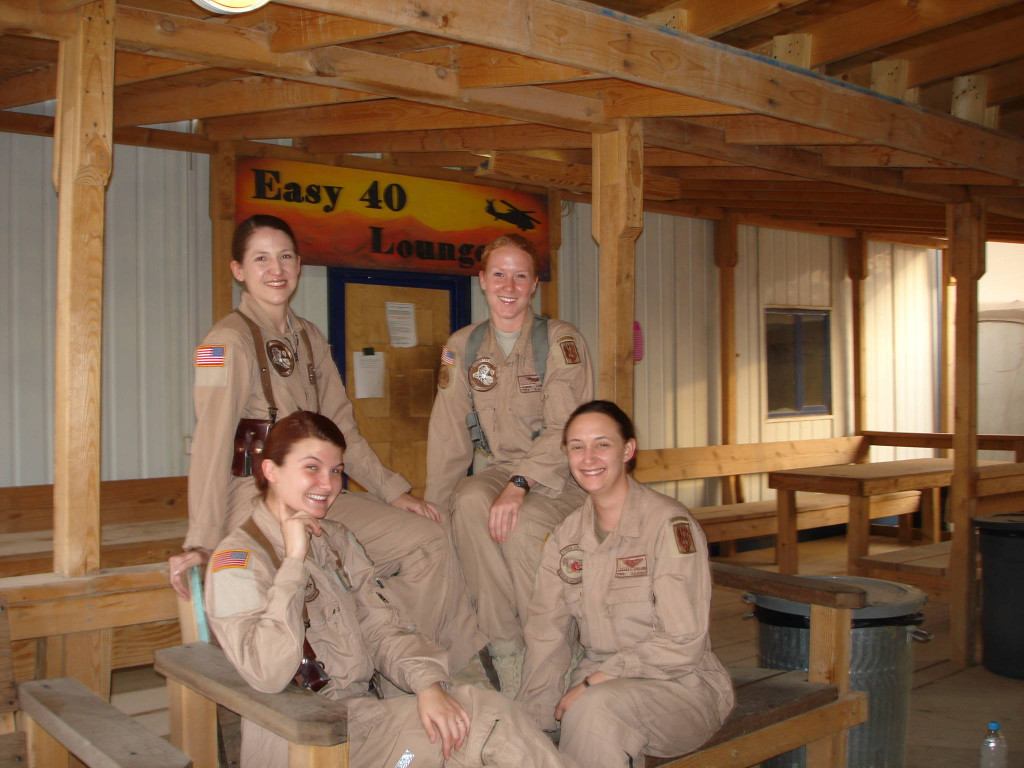 Amelia (Amy) R. Dawson, a Registered Nurse at the Central Arkansas Veterans Hospital System (CAVHS), Little Rock, Arkansas, enlisted in the Arkansas Army National Guard at age 17, serving in the 212th Signal Battalion for 6 years before transferring to 777th Aviation Brigade and pursuing a career as a Blackhawk helicopter pilot and retiring as a Chief Warrant Officer 3. Dawson, an Operation Iraqi Freedom Veteran, obtained her nursing degree upon return from Iraq with the goal of caring for her fellow brethren and living her life in a manner that honors those who sacrificed for our country.

She specifically mentions her friends and members of the Blackhawk crew, with call sign “Easy 40.” They are the members of Bravo Company 1-185th Aviation and deployed to Iraq in support of Operation Iraqi Freedom, with the 36th Combat Aviation Brigade. They were lost to enemy fire on January 20, 2007, along with their 8 passengers, when their Black Hawk helicopter was shot down northeast of Baghdad. She believes she serves their memory while serving Veterans as a nurse.

After returning from Iraq, Dawson entered nursing school at the University of Arkansas at Little Rock. As a student nurse she participated in clinical experiences at the Little Rock VA McClellan Veterans Memorial Hospital. She credits her desire to work with oncology patients to the time she spent learning on the VA oncology unit.

She graduated Nursing School December 2009. Shortly after earning her nursing license, she deployed again, this time as a Med-Evac Pilot with Det 1 Foxtrot Company, 2-238th Aviation, to Kosovo in support of Operation Enduring Freedom.

Upon her return from Kosovo in 2011, she began her career at CAVHS where she has now worked for 10 years. She has served in several areas within the organization, to include Oncology and Ophthalmology and still finds opportunities to lead. In 2017 she served as President of the Veteran-Centered Care Council, a shared-governance organization that works to improve safety as well as Veteran and Staff experience.

Observing the day-to-day interactions between Dawson and her patients can only be described as intriguing. She can be seen sitting down beside her patients and listening to their concerns and fears while providing the reassuring presence and touch that are important parts of nursing.

Dawson feels strongly that nursing is a “calling.” This is evident in the compassion she shows in all situations, but especially when a Veteran’s battle is nearing its end. Family members who have lost loved ones remember Amy Dawson by name and the comfort that she provides during their grief.

Amy Dawson was selected as a top 100 nurse in 2020 by The Great 100 Nurses Foundation, a foundation founded by PK Scheerle, RN, in New Orleans, Louisiana 34 years ago. Since its founding, the Great 100 Celebrations have honored thousands of Nurses across Louisiana, North Carolina, Texas, Oklahoma and Arkansas. These exemplary Nurses are selected based on their concern for humanity, their contributions to the profession of Nursing, and their mentoring of others. It is a great honor in the life of a Nurse to be selected as a Great 100 Honoree and the Foundation helps each RN recognize themselves as Nurse Heroes.”

After returning from my deployment to Iraq, of earned my nursing degree with the goal of caring for my fellow brethren and living my life in a manner that honors those who have sacrificed for our Country.