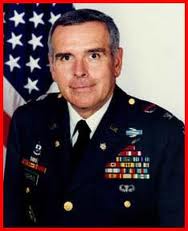 I am a retired Army Colonel with 26 years of service as a Paratrooper, Infantryman and Public Affairs Officer. I served in Vietnam, as well as, Saudi Arabia during The First Gulf War. Other key assignments included the Pentagon, the Former Soviet Union, Germany, Alaska and Hawaii.

For my service, I received two Bronze Stars, three Legion of Merit awards and the Vietnamese Gallantry Cross and the Vietnam Honor Medal. I hold the Combat Infantryman Badge, Air Medal and Aircraft Crewman Badge for 100 hours and 100 helicopter missions.

I served with the Vietnam 50th Commemorative Committee and coordinated the Vietnam Memorial for Lower Bucks County, Pennsylvania. Additionally, I am assisting the Operation Desert Storm Memorial to be placed in Washington, DC. I make speech presentations for both memorials and serve as the military analyst for the local NBC affiliate in Philadelphia.

Because there has been NO DRAFT. Selective Service Program since 1974, there are fewer service members and American families who are aware of the sacrifices that our veterans have made and continue to make for the last 47 years! I do it to sustain the legacy of ALL of the men and women who have served and are #stillserving!