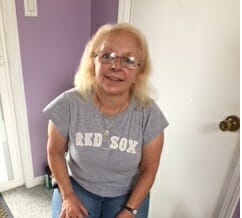 I served in the Navy Reserves from 1979 to 2010, I was deployed three times: Desert Storm/ OIF/OEF
As Chief during my second deployment I wore 5 hats, we were very short-handed so I was quite busy. Mostly in charge of training, little of supply, managing the living quarters of 50 female personnel, ordered 239 enlisted exams while stationed in Kuwait/Iraq also in charge of making sure the CO stayed out of trouble. While stationed in Afghanistan one year BOG besides in charge of berthing I was the lead driver in a few convoys.

On April 10, I spent the day packing and loading vehicles with produce (that was the area I was assigned to) the Patriot’s Foundation and Revolution Charitable team with Mass support foundation planned to provide 1.4 million meals to active duty, military veterans and their families (you must show Military ID or it can be a DD214 as well). Their plan was to have it again on that following Monday but if it rained it will be on Wednesday. Location Gillette Stadium Foxboro, MA P1 lot 5. Time 10 to 2, I was there from 9:30 to 3:30 needed to clean up

I have been volunteering for the VFW Post 697 since 1995, it gives me a good feeling knowing I am helping others