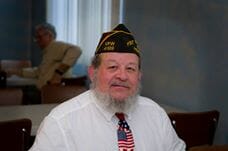 As Service officer I like to help Veterans get the benefits they have earned.
As VAVS Representative, I enjoy having bingo and other events for the resident patients. I sponsor special dinners and picnics, tickets for Altoona Curve baseball games, personal health care items, and numerous other events for the resident patients. These things are made possible because of the generosity of a few of the Posts out of 70 posts in the VAMC’s catchment area.