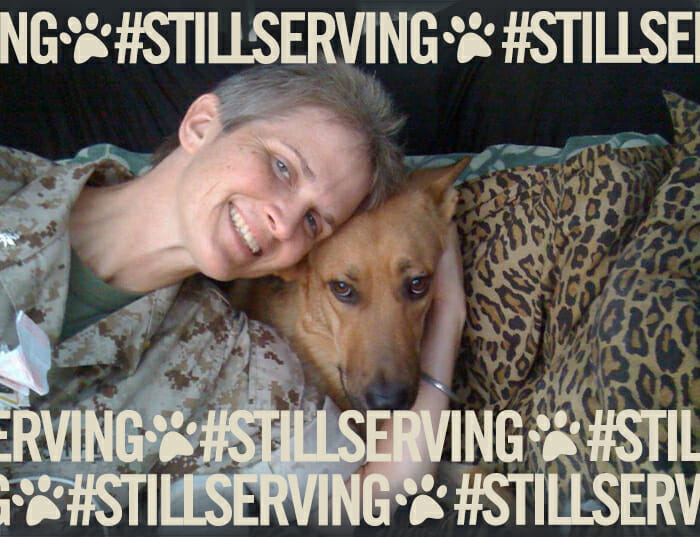 In 2011, Navy nurse Julie Hendrickson was in Los Angeles for training ahead of her next deployment when she spotted a dog on the freeway.

Thinking it had been hit and killed by another vehicle, Hendrickson went to remove the animal from the road and found the dog was still alive.

Critically injured and in shock, Hendrickson got the animal to the nearest Vet ER where she remained in critical condition for the next few days.

Once the dog was released, Hendrickson tried to find her a home. After the trauma she endured, though, the dog was extremely scared and timid. Each attempt to place her with a family failed.

Hendrickson decided to keep the dog and named her Freedom. Years later, she is in awe of Freedom’s progress and recovery.

“I think of how I found her, how far she’s come and all the moments she’s had in between, both with me as well as other animals and people who have helped along the way,” said Hendrickson.

“When I reflect on this, Freedom inspires me to have patience with myself and to believe in the power of community to help with my own growth and recovery.”

Throughout her Navy career, Hendrickson became heavily involved in animal rescue efforts and has a multi-animal family. Through her experiences with Freedom and other animals, she grew to appreciate the significant mutual healing made possible through the human-animal bond.

“It became clear that the animals I was helping were helping me, too,” she said.

Freedom has gone from needing significant support to providing it. Although she is not certified as an emotional support dog, Hendrickson knows she is capable.

“Freedom has none of the designations, but what people often overlook is that animals like her have the natural capacity to be therapeutic and are very responsive to our energy and emotions. Any additional ‘training’ for her would just be ‘knife-and-fork school,’” explained Hendrickson.

Today, Hendrickson is in the process of making a career change from registered nurse to transpersonal nurse coach and plans to pursue a role as both practitioner and researcher in support of veterans and the human-animal bond.

Hendrickson plans to launch a program to help veterans explore and utilize more holistic self-care practices, including ones to help deepen their bonds with animal companions.

“My animals began to serve as a model for me on how I could help myself, and eventually, how I could work with other veterans and their animals to facilitate mutual healing and growth,” explained Hendrickson.   As she continues on this new path, Hendrickson is grateful for the comfort and support she has shared with Freedom and her other animal companions. She looks forward to helping veterans explore wellness in body, mind and spirit alongside their own animal companions.