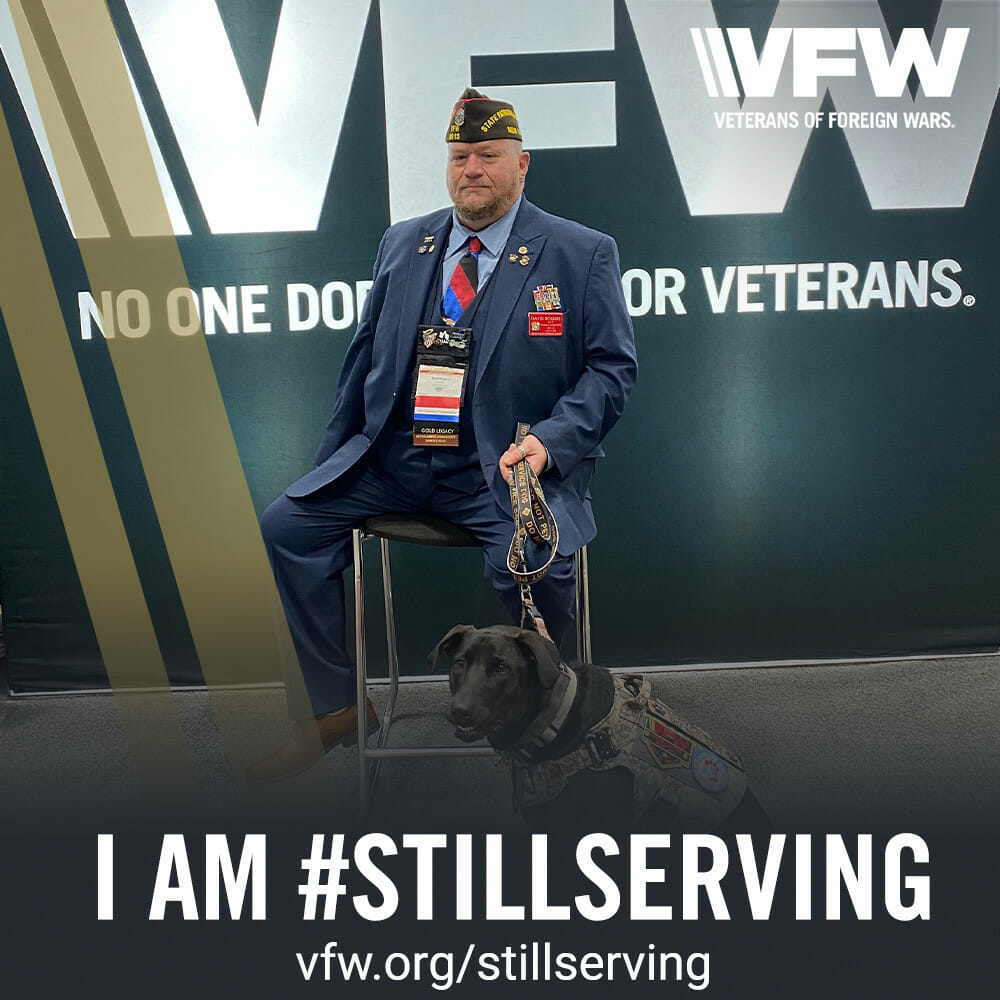 “I am the VFW because the VFW saved me. When I was at my lowest, the VFW brought me back from the edge, giving me another reason to continue #StillServing,” said Dave Rogers, a past All-American Commander at VFW Post 2913 in Patchogue, New York.

Rogers served in the U.S. Army for 14 years and was deployed during Operation Desert Storm. After transitioning out of the military, he struggled to navigate the change to civilian life – until he found the VFW.

“Or as I like to say, the VFW found me. And when I was doing better, I began getting involved at Post events like parades and fundraisers,” Rogers recalled.

In connecting to the support and camaraderie of the VFW, Rogers discovered new outlets for service. He took on leadership roles at the Post and recently began serving as state media chair for the VFW Department of New York. Rogers’ focus has been building bridges between veterans and the community, especially while serving as Post 2913 Commander. This effort took on more importance last year as he led the Post through the challenges of the pandemic.

Rogers moved his “Coffee with a Veteran” meet ups from a local coffee shop to Zoom. The Post hosted “Virtual Veterans in the Classroom” where veterans from nine states got to share their experiences with a middle school that had not had veterans visit for some time. Rogers learned veterans were on a waiting list to get hot food, so he started “Cooking with a Veteran,” which is now a larger project for the Post.

“When I was cooking for home bound veterans, they loved to hear about what I put into my food, and the stories of where I learned to cook these dishes. The idea is to turn this into a cookbook to help stomp out hunger amongst veterans in need,” stated Rogers.

“I’m impressed with the level of involvement from my Post and Auxiliary members. For Valentines and St. Patrick’s Day, we cooked for the local community, first responders and a domestic violence shelter. The members had so much fun cooking together on Facebook Live and sharing our food that we’re planning more and bigger events.”

Getting to sit with veterans, listen to their stories and share food has given Rogers great memories and more reasons to keep answering the call of duty. In addition to his work with the VFW, he sits on boards with a VA Hospital and government officials to help bring solutions to veterans’ issues in the community.

“While some people struggled to find ways to do things during this difficult year, it was the use of media and willingness to try new things in new ways that has allowed our Post to grow and remain active,” Rogers said.

“It’s all part of ensuring that we continue on with our mission of helping veterans, their families and the community.”