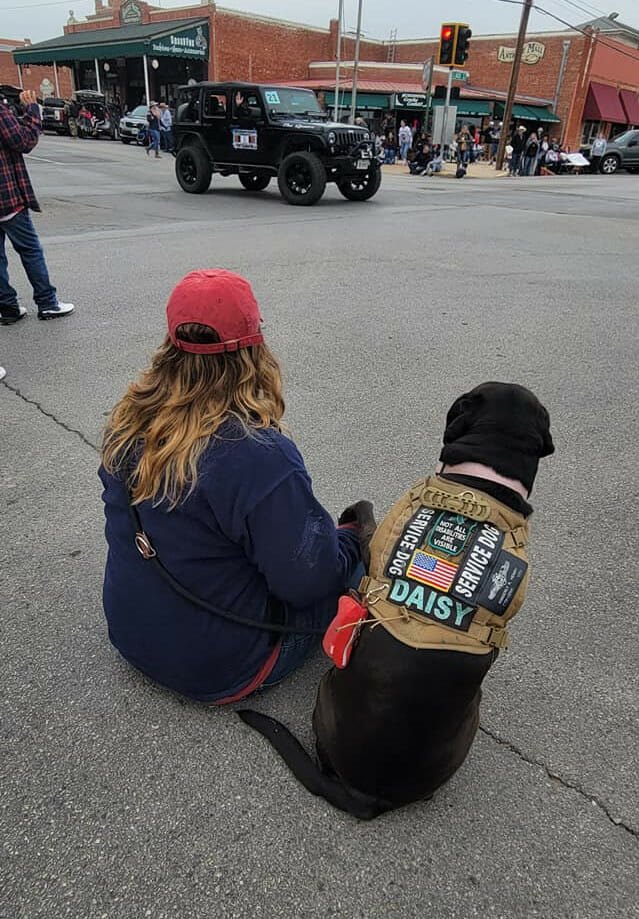 Kimberly Henry served in the Navy for 10 years. During a permanent change of station from Hawaii to Texas, she welcomed rescue dog Daisy into her family. Before long, it was clear that the 10-week-old puppy was unique.

“Daisy grew to be very aware of me,” said Henry. “People would comment on her demeanor, manners and keen attention to me.”

“When I got out, I was really struggling with figuring out who I was, including trying to accept how my experiences in the Navy will never leave me,” she explained. “Furthermore, I was experiencing new trauma followed by retaliation, which only revictimized me from a past experience.”

She developed severe anxiety, and when her first panic attack hit, Henry did not know what it was. Concerned she was having a heart attack, Henry called 911. Daisy was beside her the whole way through.

“Daisy got up and walked over to me and essentially sat on my crisscrossed legs and leaned into me. I just hugged her,” recalled Henry. “She would not leave my side and was somehow touching me the entire time the fire department was there.”

Following that episode, Daisy continued to comfort Henry when she became uneasy. Often, she was able to calm Henry’s anxiety before it turned into a panic attack. Henry decided to get Daisy trained as an official service dog.

“Because of her, I can do what I need to do to live a healthy and purposeful life for myself and my kids,” said Henry. “I know it is cheesy, but even though she came from a rescue, she really came to the rescue.”

With Daisy, Henry is #StillServing by showing other veterans how they can improve their own lives and mental health.

“Now, she doesn’t just support me,” said Henry. “Together, we encourage others to get help.”

The pair are also raising service dog awareness so that those who depend on their companions are not judged or misunderstood.

“As a female veteran, single mom and business owner, I get a lot of doubtful looks and silly questions, like ‘how do you take care of your kids if you need a service dog?’” said Henry. “My goal is to help others understand that service dogs are meant to do certain things to help their person.

“I’m always open to sharing what a service dog is, what Daisy does for me and why. As a team, we work to combat the stigma of veterans, disabled veterans, women veterans and people living with mental health challenges.”