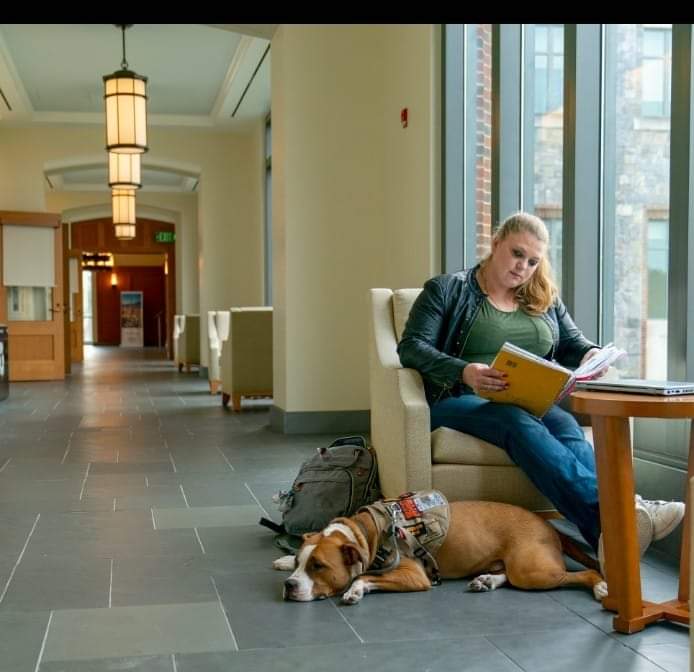 As veteran Maddie Fletcher was scrolling on social media, one post caught her attention. A friend who had a litter of puppies shared that if one of them was not adopted soon, it would be taken to the shelter.

Fletcher decided she could not let that happen. She brought the six-week-old puppy home and named him Remi.

Coincidentally, just a couple of weeks later, the organization Vet to Vet contacted Fletcher. Aware of her Post Traumatic Stress, the representative asked if she was interested in a service dog.

Fletcher shared that she had just adopted a puppy. Rather than provide Fletcher with a new dog, the organization offered to train Remi. In the five years since, Remi has been a source of strength for Fletcher, who is #StillServing today.

“I have severe PTS from when I was in the military and really bad anxiety,” she explained. “Remi is able to get me out of my shell to where I’m able to help people.”

As a VFW Accredited Service Officer and Commander of VFW Post 5444 in Dover Plains, New York, Fletcher leads a variety of efforts to uplift veterans in her area. Through it all, Remi remains by Fletcher’s side.

“He goes everywhere with me,” she said. “Everybody loves Remi. He’s a burst of energy when he enters a room.”

When he accompanies her to work, Fletcher explained, Remi has his own routine, greeting everyone and ensuring they are all okay.

He helps outside of VFW functions as well. About two years ago, Fletcher started a women’s veteran group that meets once a month to check in on one another. It is a way for attendees to connect and talk through what is happening in life, both good and bad. Remi attends each get-together with Fletcher.

“He’s a comfort to others,” she explained. “When we have problems and talk about them, he goes to where the anxiety is and can get people to open up.”

Remi even inspired another veteran in the group to find support of her own.

“Whenever we were together, she kept saying she needed her own Remi,” explained Fletcher. “Remi influenced her to get her own service dog because she saw how he helped.”

In addition to these efforts, Fletcher finds other ways to serve veterans in her community. For instance, she recently helped put up more than 100 banners for the Hometown Heroes Banner program. It was important to her to help veterans and their families get the recognition they deserve.

Regardless of the task Fletcher takes on, Remi is ready and waiting to help.

“Without Remi, I wouldn’t be able to do half the things I’m able to do now,” explained Fletcher. “I can help more veterans who are going through a tough time because of him.”