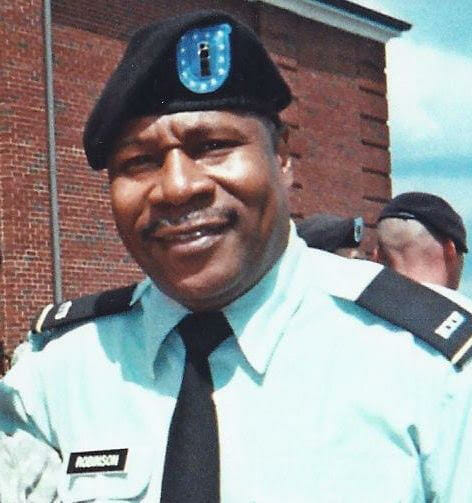 Edwin D. Robinson Sr. served four years in the Navy before a 30-year career in the Army, where he rose to the rank of Chief Warrant Officer 2. After more than 10 years with the Department of Logistics, he retired. But the Bronze Star recipient had no plans of slowing down.

“I wanted to return to my high school in Columbus, Ohio, to mentor young men, so I started volunteering for a nearby non-profit called, Nehemiah House of Refuge,” he said.

Robinson began working with men experiencing hardship. Some were fatherless or homeless. Others were recently released from prison and looking to regain their footing in the community.

For more than a decade now, Robinson has continued to serve alongside Nehemiah House of Refuge CEO Terry Byrd — a fellow Army veteran — to uplift at-risk men.

For each, Robinson explained, his goal is the same: “to provide a place where they could make life better for themselves.”

Before launching a mentorship program, Robinson met with local school board officials to explain the initiative. He did this in hopes of gaining their approval to go into three area high schools to connect with young men who would benefit from participation. His proposal was enthusiastically received.

“There are so many young men that need a man to mentor them and show them that there is a better way of life,” said Robinson. “They are more likely to accept that when they hear it from a man who knows what it’s like to be in prison … knows what drugs will do to them … knows how it feels having to fend for themselves.”

Robinson and Byrd oversee the mentorship program and a men’s focus group. Participants of both share their stories and learn from others to break negative cycles and make better decisions.

Additionally, as CFO and chair of the organization’s Scholarship Board, Robinson leads efforts to recognize a select group of graduating high school seniors for their achievements. The program is meant to inspire recipients to one day, give back to others in need of encouragement.

“The hope is that they will return to their communities and share their education and experiences with younger students,” he said.

Robinson’s service does not stop there. He is an elder at his church and an active member of its Worship Band as a saxophonist and electric bass guitarist.

Throughout the last two decades, Robinson has fostered more than a dozen children. He and his wife adopted two of their foster sons when the boys were eight and nine. Now adults, Robinson continues to care for them as they prepare to enter assisted living.

“It’s a shame, but we do have homeless veterans. Our VFW Post is a place of refuge for them,” he said. “They are always invited to come share a meal with us.”

Reflecting on his life, Robinson recognizes how experiences with others have shaped him. He continues to do whatever he can to be a positive influence in the lives of others.

“I try to serve where I can,” he said. “And I want people to know there are resources that can help them — that’s why I feel it’s important to volunteer my time. I can share what I have been blessed with through my work in the church, meeting men who care for me and the experiences I’ve had while serving my country for more than 30 years,” he said.

“As an African American, I feel it is my duty to show our young men that they too can be successful and overcome any obstacle life may lay before them — just as I have done.”