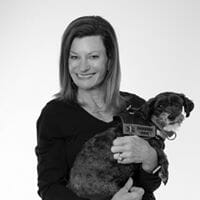 Following these deployments, I began experiencing a lot of issues with PTSD, as well as being diagnosed with a TBI. Much of my day to day existence was filled with anxiety and depression. I began to isolate more and more–being around large groups of people, traveling, and many day to day “routine’ activities became difficult. I noticed I felt a lot more anger and frustration and would sometimes explode over small incidents. I never could understand what was triggering these issues. When I began to lose confidence in my abilities as a RN, I knew I had to take action.
I had recently lost a dog that I had loved–and was determined to never get that attached to another one. A few days before Christmas in 2016, I noticed a small black lump by the side of the dirt road leading to our farm.It was covered in leaves, sticks and dirt. This very small animal was a dog.As soon as I picked her up and put her in my car, she crawled into my lap and looked straight up at me. That was it. We were bonded from that moment on.
I discovered she was a Schnauzer-Poodle mix. Not your typical service-type dog, but then again, I did not feel like a typical veteran.
She was easily trainable, and I worked with a veteran operated Service Dog program to help get her trained. She was extremely easy to train, and remained remarkably calm in the most turbulent environments. (Fireworks displays, public transportation, airports/airplanes, large crowds of people). When I brought her with me, I felt more centered and calm. I did not experience as much anxiety/fear. That and working with my TBI provider and going through a PTSD treatment program, changed my life for the better.
I work as a RN in a VA Hospital.She comes to work with me almost every day. As soon as we walk in the building, she is greeted by her many fans. Everyone in our hospital knows “Gracie”, although they may not know my name. I put her in the lap of a veteran who was struggling with the loss of his mother. He held her and cried. She seems to sense when others are in emotional/physical distress, and she will lay at their feet to be petted. Many veterans have told me, “I don’t know what helped me more, the treatment I got from the clinic, or spending time with Gracie”.

Because what she did for me, she now does for every veteran she meets both in my VA Clinic (I work with Traumatic Brain Injury, PTSD, Polytrauma patients) . I can see, by the smiles that she brings to people’s faces, that she brings hope to many. A lot of people have looked at Gracie, in her little service dog vest, and said, “That’s not a service dog”. All I can say is that she serves everyone she meets, which is truly what “Service to Others” means.