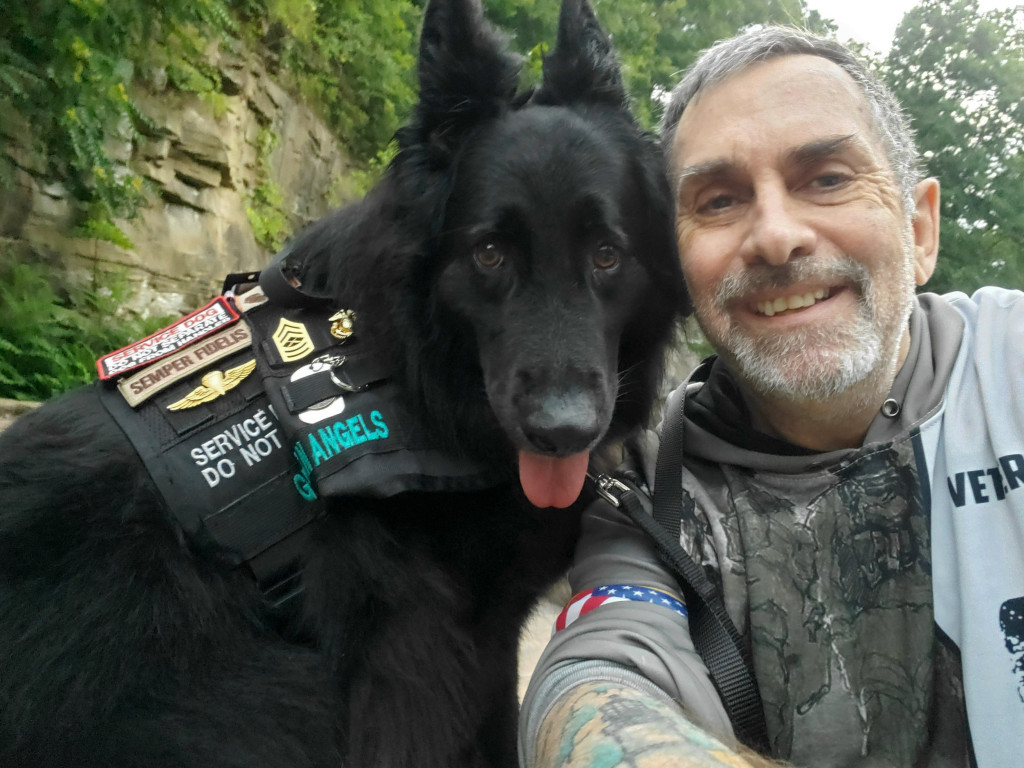 I spent 21 years in the Marine Corps and retired as a MSgt. I am a combat veteran that served in the Gulf. There I was exposed to Sarin Gas. I am also spent to multiple years at Camp Lejeune and I am part of the water poisoning. I have had memory issues, I have PTSD, I have tremors, I have had 14 throat surgeries and have other issues as well. I became pretty much someone who would not go anywhere. I would stay in my basement while my family would go out. I got to the point that I didn’t want to be alive any more. I started planning how I would do it. To make a long story short I got an opportunity to get a medical service dog from Guardian Angels and since then my life has change.

Foxy is a Medical Service Dog provided to me by Guardian Angels Medical Service Dogs. She has already been responsible for saving my life since / potentially saving my life. There has been multiple events. 1 included after we were first paired that she alerted me that was something wrong. I didn’t know what was going on but I knew that if she kept alerting that I should go to the hospital. When I got to the hospital we found that I had internal bleeding. It was not serious but I had no idea. The second big moment was when I was having a hard time sleeping the past two nights and I needed to get some sleep so I took my VA Prescribed sleeping medication which put me out cold. Around midnight I felt two paws on my chest and licking to my face. As I woke up I said why the hell are they testing the fire alarm at midnight. I realized almost immediately that they don’t test fire alarms at midnight and I got Foxy vested and we headed out of the building. As soon as we got outside we heard people yelling to get out of the building and multiple firetrucks all around. Their was a fire in one of the apartments on our side of the complex. This could have been devastating.

Foxy has given me my life back and created a new normal for me. Although it was to late for my marriage her and I in two years have done so much. I have gone out to public places more often, I speak at events about the importance of Medical Service Dogs and I even SPEND TIME WITH MY CHILDREN AND GRANDCHILDREN.

If it wasn’t for Foxy I wouldn’t be here today.

My life now is with a goal to help raise money for Medical Service Dogs for veterans. With an average of 22 Veterans per day taking there own life and with over 350 dogs that have been paired with Veterans from Guardian Angels not one of them has taken their life.

Yes I do have a website. https://www.FoxyAndCraig.com
Please call me if you have any questions.