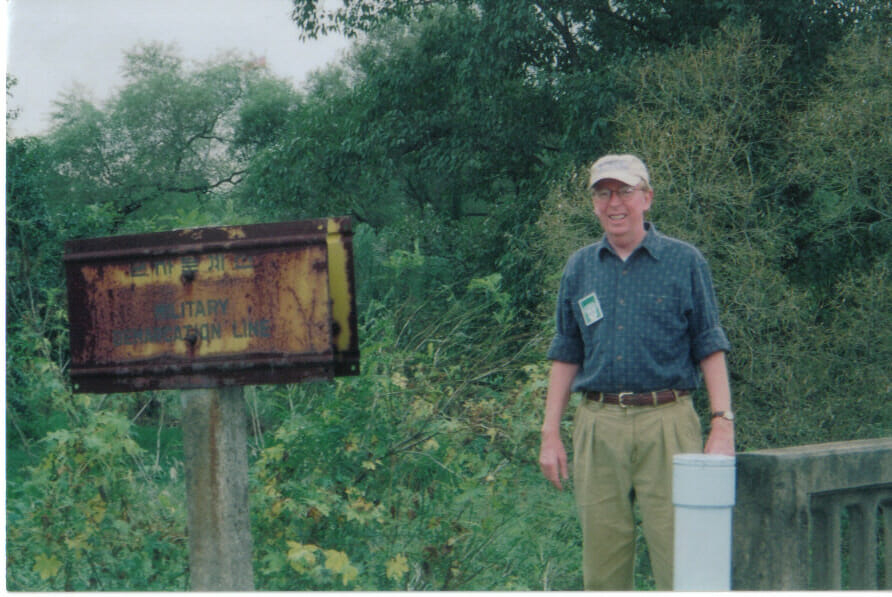 Company C, 3/23rd Infantry, 2nd Infantry Division, in and around the Korean DMZ 1968 & 1969. My advanced individual training at Ft. Dix was as a rifleman. When I arrived at my company in Korea, we were down south of the Imjin River about a mile or two, and I was made a company clerk., but when we rotated north of the river to guard and patrol the DMZ in June 1968, for our 4-month tour (we rotated every 4 months north for 4 months and south for 4 months for the whole 16 months I was there), I volunteered to go back into the line platoon as a rifleman, where I pulled night ambush patrols, stayed in foxholes and mini-towers along the barrier fence during the long dark nights and served tense missions 4 days and nights at a time on GP Gladys right in the middle of the DMZ. I received an Imjin Scout patch after my first 20 missions in the DMZ and spent many more days and nights in and along the DMZ during our second tour north of the river in the winter and spring of 1969.

I am writing a series of articles, titled, "Letters from a Foxhole" for a South Korean publication. I have had 2 published so far and my third will be published next month. In my "Letters" I am telling the South Korean people what my buddies and I did in 1968 and 1969. I want them to know about Michael Rymarczuk, from Philadelphia, and a KATUSA named Kwan who were killed in the DMZ in the summer of 1968 and about Earl Jeffery, Cleveland Davis, Reese Weathers and another KAYUSA, named Um, I.S. who were all wounded in the DMZ in the summer of 1968. These were during 4 separate firefights with the North Koreans. They were all in my platoon, 3rd platoon. I want to honor them and the others who served in Korea in the late 1960's. And to educate the Korean people about American soldiers who have served protecting the Republic of Korea from North Korean invasion and infiltration.

I am an old man now, but I feel a need to tell our stories, or they will be lost. I saw a tv show which featured Ray Lambert, who was a medic at D-Day. Ray wrote a book about his experiences. He said: "What kind of man would I be, if I didn't tell their stories?" That's the way I feel about my buddies in the DMZ of Korea in the late 1960's.