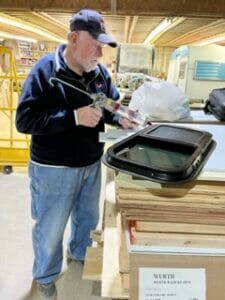 Ed served in the U.S. NAVY 1966-1970 and then continued on with Department of Defense (DOD) 1971-1972 as a sharpshooter. His MOS in the Navy was Gunners Mate. In addition to these duties, Ed had qualifications in demolitions and S.E.R.E.. After six tours in Vietnam, Ed left the service. While using his Vietnam GI Bill, he completed a major in electronic engineering and an apprenticeship in iron working and steel rigging.

Comrade Harmon presently serves as the Junior Post Commander at Reverend Joseph Lamarre Memorial VFW Post 2197, located in Topsham, Maine. He is also active in the Boothbay American Legion, spearheading bi-weekly Sundays Breakfast for the community. Additionally, Comrade Harmon is the CEO of Boothbay V.E.T.S. (Veterans Emergency Temporary Shelter) Incorporated out of Boothbay, Maine. His mission statement can be found at https//boothbay-vets.com on the web. This company is a non-profit organization, run strictly by volunteers. Under Comrade Harmon’s leadership this company was commissioned to manufacture and provide short term shelter for Homeless Veterans who do not have access to shelter.

In 2018, Ed became aware of a terrible situation concerning Homeless Veterans in Maine, when one regrettably, succumbed to exposure in the harsh Winter months due to the lack of a proper shelter. Seriously affected by this, he decided something had to be done to help Maine’s Veterans. Presently, V.E.T.S Inc, partners with Maine Department of Veterans Affairs and Maine Veterans Services to identify and meet the needs of Maine’s 100 + Homeless Veterans. Ed used his aforementioned training and education to create a prototype trailer and, along with his force of volunteers, subsequently, manufactured, retrofitted and/or refurbish 26 additional trailers. This feat has been accomplished only with donated funds, services and materials. Ed continues, to this day, recruiting help, funds and materials to keep his project vibrant. He does this out of the kindness and love for his fellow Veterans. When asked why, he stated “there is a real need to solve our homeless and suicide problems among the Veterans, in our community and I am simply doing my part with the means and skills I know”.