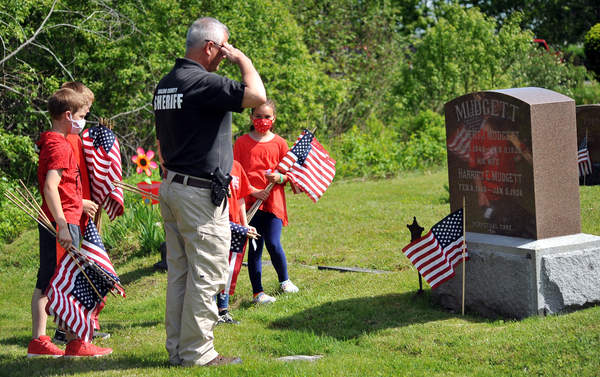 The event was sponsored by Randall Collins VFW Post 3108 of Belfast, and had help from Waldo County Sheriff Jeff Trafton.

VFW Operations Manager Jim Roberts said this is the fourth year the VFW has partnered with students from Ames for its “Veterans in the classroom” program. This day is also an opportunity to remember, honor and teach, he added.

Last year activities were scaled back because of COVID-19, Roberts said. This year, only two fourth grade classes were allowed because of the pandemic.

Roberts said they remember and honor the fallen by saying their names out loud, then salute them for their ultimate sacrifice and say thank you for their service. “Typically we put out around 850 flags for veterans,” he said. Saturday, May 29, volunteers will come in and make sure all veterans’ stones have a flag.

“They say a veteran dies twice,” Roberts said. “Once when they take their final breath, and later when they are forgotten. … It’s all about honoring our veterans.”

“We are trying to carry on the history that freedom is not free,” he said.

He Also said the day is an opportunity to teach kids how to honor veterans and give them an appreciation for something they may take for granted.

“This kind of humanizes it for them, It makes Memorial Day have a little deeper meaning. The kids are able to understand a little bit better.

Trafton said, “I love doing stuff like this. It’s dear to my heart, being a veteran myself, (Marines), The kids are really engaged.”

Ames Elementary fourth grade teacher Sarah Nelson said 28 students took part. “Just last week we were able to extend it to two classes,” she said. “Some teachers were saddened that the whole school could not attend.”

Nelson said she was fortunate to have taken these same kids to place flags at Grove Cemetery when they were in second grade in 2019, when the entire school attended the event. “This is our first field trip since the pandemic,” she said.

“We really had to think out of the box to keep our collaboration going with the VFW,” she said. ”We are already making plans for next year.”

Fourth grader Audreena Blackington said the field trip “meant a lot” and that she appreciated everything the veterans had done. “We appreciate their service,” she said.

Aubrey Kinney said, “I’ve learned people have fought for us so we can have freedom and we should honor and respect them every day.”

Practicing the Code “Remember, Honor, Teach”
We remember our fallen by saying their name
We honor them by giving them a salute
We are treaching the next generation freedom is not free and we shall carry on the tradition