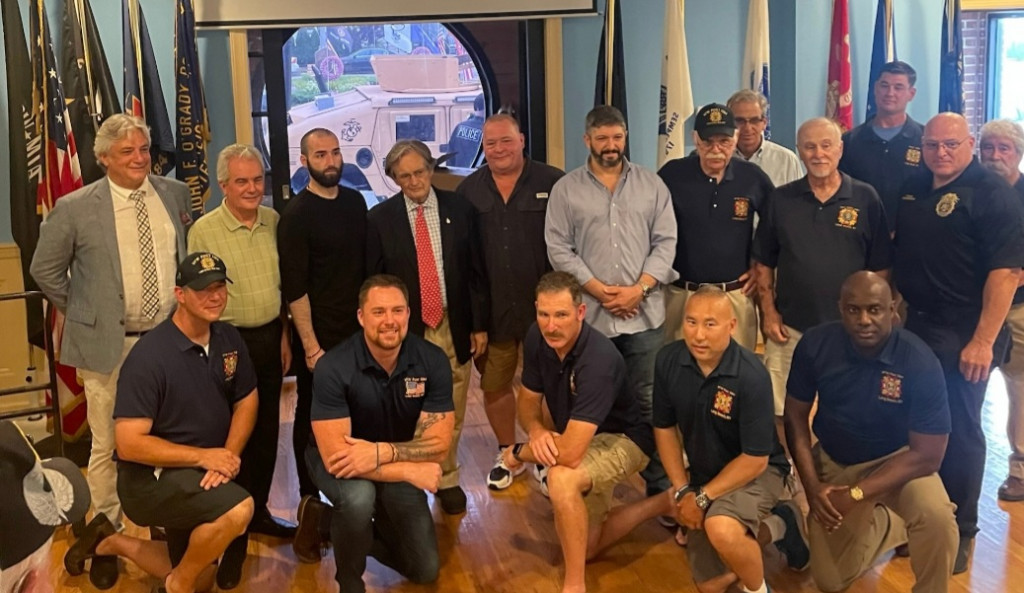 As Senior Vice Commander of our post I organized a block party to involve younger members, family members and our community last September and we hosted a flag raising in solidarity of the SAR Flag Veterans Suicide Awareness and Remembrance Flag.
In May I organized a dual benefit concert at a local venue, The Cabana for our VFW and the SAR Flag with a well known Irish American band, Shilelagh Law (halfthebottle.com).
Two weeks ago we hosted, on short notice, Project Dynamo (projectdynamo.org) that has extracted thousands of Americans and American allies from Afghanistan and Russian held Ukraine the day after the project founder, Bryan Stern (VFW life member from Florida) returned from 150 days in Ukraine. With him was three Americans they had extracted. Despite only having 4 days noticed, we raised closed to $20,000 and David McCallum attended (Ducky from NCIS, the Man from U.N.C.L.E and The Great Escape).
Last weekend, in conjuction with Kevin Hertell, an Auxiliary member of our’s, also the founder and president of the SAR Flag Corp, we led the parade procession in Center Moriches, NY at the annual USA Patriots (formerly known as the Wounded Warrior Amputee Softball team) softball weekend.

My motivation for embracing the role as veteran advocate stems largely from knowing that I possess skills that lends to championing our cause at a high level, but even more specifically because the Commander of our post has inspired me by building a model for success and economic viability for the long term future by making recruiting veterans of all ages a priority, supporting our Auxiliary to grow to a level of one of the largest Auxiliaries in the Northeast and fostering relationships with every level of our community, from private individuals to businesses and organizations.
My father was in Vietnam and was in and out of jail on and off a large majority of his adult life and although we fairly estranged later in life, when he told me over the phone while living in Kentucky that he wasn’t feeling well, went to the VA there and they said there was nothing wrong with him, I told him, despite everything between us, he should come live with me in Long Island because he could use his grandkids in his life and they could use him, desoite our past and they didn’t need to know about all of that and the details. Just a few weeks after him coming out, I brought him to the VA in Northport, NY in Long Island and he was diagnosed with stage 4 Lung Cancer. I know if something of that magnitude could happen to him, it could happen to any veteran. Our role as safeguards and guardians was emboldened to me through that experience.
My oldest son is also currently in the US Navy and stationed in Monterey, CA at the Presidio of Monterey who is also a member of our Auxiliary, as is my wife Barbara.
I also take great pride in our post for raising the most funds through Buddy Poppy donations of any post in New York state for the last 7 years.