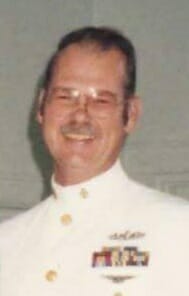 Desert Shield/Desert Storm 1990-91
I was Amphibious Group 2 N-31 Staff which required that all Amphibious Ships be inspected for Combat Readiness prior to Desert Storm.
PhibGru 2 was attached to the U.S.S. Nassau (LHA-4) which was outfitted with a Marine Corp Air-Wing, flying the Vertical Take Off and Landing AV-8B’s (without any type of onboard radar systems}. This meant that the ship required an Air Intercept Controller (AIC/S) and the only AICS onboard was myself. Conducting Pre & Post Air-Wing briefings, controlling multiple aircraft, scheduling all CIC Combat Readiness Evaluations took precise and tireless planning and scheduling with the PhibGru 2 Operations, Engineering, and Marine Officers. Completing all tasks and inspections as well as SIX Combat Intercepts of Iraqi MIG aircrafts enroute to Iran, to preserve their assets, all prior to Desert Storm was exhausting at times but ultimately rewarding.

I was recruited by an exceptional WW II Veteran, Earl Fletcher, and I signed up immediately as a Life Member, volunteering for everything that needed more support; ie Buddy Poppy, Mowing the VFW Post’s 3.5 acres of grass during the Spring, Summer & Fall months here in S/E Texas. Then when our Quartermaster, Marion Jardee, finished her Jet Mechanic Training and the only opportunity to use her skills was in St. Louis, MO our post required an impromptu appointment. I offered my services and was duly elected as Post Quartermaster. Now Marion made the job look easy but learning everything from the books which initially was overwhelming but with Marion’s email/texting assistance and the outstanding leadership of our Post Commander, Richard Moore, and Sr. Vice, Jeff Beam, I am now learning and acting like a real Post Quartermaster.

WHY? For me the answer was quite simple. I served 24 years in the U.S. Navy and I missed the comradery and I needed something to take the Navy’s place. Once Earl Fletcher told his Navy WW II stories I was in complete awe and I knew that I needed the VFW as much, if not more at the time, than they needed me. I was never looked at as another number on Local, District or State quotas and I never felt that way.

I AM A TEAM MEMBER OF THE BEST ORGANIZATION IN THE WORLD NOW.