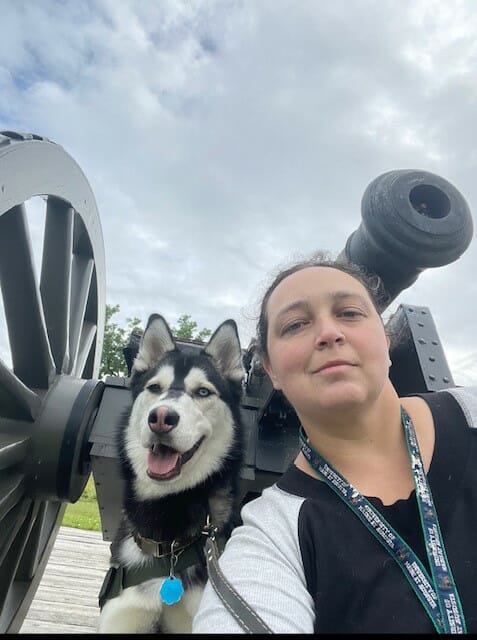 I got back from Iraq in March 2005, and despite having spent a year in Baghdad with the other members of my unit, I found it very difficult to connect with them, partially because while I was only 20, I was married and my former spouse was stationed over 500 miles away – typical barracks life wasn’t something that really applied to me. My love of horses led me to the MWR ranch at Fort Hood, and I spent most of my weekends there riding as I awaited PCS orders which would reunite me with my spouse after two years of separation – in retrospect, this was the first indication that interaction with animals was going to become part of how I cope with personal trauma.

Later that year, my PCS orders finally came through for me, and while that was a relief, I lost access to the ranch and there were no riding facilities near my new duty station. Shortly after PCS’ing, I experienced the loss of my first pregnancy, and being cognizant of my connection with animals, my former spouse suggested that we buy a dog to aid in my ability to process the grief. We ended up choosing a Siberian Husky, and the bond I was able to build with that dog over the next two years was instrumental in helping me move past that additional trauma and cope with the everyday stresses of active duty/dual military life. One of my biggest regrets is feeling as though I had no other choice than to rehome him when I had to move to my next duty station across the country – I wish I had known more then about how to move with animals.

I knew I wouldn’t be able to handle bonding with and then losing another animal, so I chose not to get another dog until after I had left the military, and about a year after I ETS’d, I purchased a black lab puppy who quickly became integral in my attempts to transition back to civilian life. My two children loved him as well, especially my youngest child, who became particularly close to him following my divorce a couple of years later. I was already not coping well with transitioning back – I had begun failing classes in college (a far cry from being recommended for ROTC prior to my ETS) and was starting to move between part time jobs as my marriage was deteriorating. I started in a Federal trades apprenticeship but approached my civilian chain of command about resigning after a couple of years following the finalizing of my divorce in order to seek more intensive treatment from the VA. My manager, a retired Air Force veteran, suggested that instead of resigning, I request a leave of absence and use of FMLA to undergo care. At that point, I certainly wasn’t thinking objectively by myself and just wanted to be done, but fortunately I heeded their advice and requested the protected leave without pay status as opposed to resignation.

While attending one of my appointments at the VA hospital, I came across another veteran who was there with his service dog. I approached him and he was kind enough not only to let me pet his dog, but also told me how to contact the organization he had worked with in order to get his dog. Even though I was working part time as a school bus driver to just barely make ends meet, I knew I was eventually going to have to return to federal employment in order to sustainably provide for my children as a newly single parent. Because of this, I would no longer be able to spend as much time with my dog as I was then, and it had become obvious that the additional time I was getting with him was immensely helpful to me – I was very anxious about returning to work and no longer having access to my dog as a result, so I decided to reach out to the service dog training organization which the other veteran had told me about.

My application was accepted and they evaluated my dog for suitability, and even though he was older than the dogs which normally are selected for the program, they accepted us due to the bond which we had already established. The class would not occur until after my return to work date, but I was encouraged knowing that there was a light at the end of the tunnel for me. I returned to work as an apprentice for a few months, and then resigned after applying and getting hired for a secretarial position elsewhere on the installation. The same manager who encouraged me to request the leave of absence also offered to try to find a way for my dog to come to work with me while I was an apprentice – even offering space for my dog in their own office area, but we eventually determined that due to the nature of my job, it would be better for my overall physical and mental health for me to look for a different position.

My manager suggested I meet with my new supervisor early on in order to start a reasonable accommodation process which would allow me to bring my dog onto the installation and into work with me. My new supervisor was quite supportive and advocated for me through the process as well, although it proved to be challenging as my dog had the distinction of being the first PTSD service dog to be permitted on our installation – there was no precedent which the management team or EEO office could follow other than what was there for more common reasonable accommodations. Two of the biggest challenges were from the legal office and security department – I experienced significant resistance from the security department because they would occasionally bring K9 teams around the installation – and there is still a significant stigma against people who utilize PTSD service dogs. Fortunately, this has lessened to some degree over the years due to the increased media exposure, but at the time my managers were advocating for me and my dog, it was still an uphill battle. But in the end, they were successful, and I was granted the reasonable accommodation to bring my dog to work with me – first in training to acclimate both him and me to our new work environment, and then fully functional after we completed our training program through K9s on the Front Line, which incidentally was the first blended group therapy program I had been willing to participate in – ever – a significant milestone for me – I was only willing to take that step forward because of the opportunity to have my dog trained as my service animal.

Over the next two years, my dog not only worked in service to me, but many other veterans who worked in my division, and even other departments on our installation would somehow find themselves frequenting my office – even another senior manager who was a grizzled Marine veteran would come visit from time to time after he’d had a particularly stressful meeting, and spending time with my dog would help him reset as well. After work and on the weekends, there were several occasions when we could be found at our local library where some of the young patrons would read to my dog – his presence made them more relaxed, especially some who were struggling with developing their reading skills. We participated in school supply drives, and even visited a nursing home a couple of times when my grandmother was alive – many of the residents loved seeing him! When I moved on to another position, it was expressed multiple times that my dog and I come back and visit from time to time – he had had not only a positive impact on me, but also on many of my veteran coworkers who probably would have benefited from having their own service dogs but were unable to explore that option.

Sadly, my dog passed away a couple of years ago due to complications with an inoperable tumor – suffice it to say that I was devastated. While I was not personally ready to get another dog right away, my children were negatively impacted by losing him as well, and per their request, I purchased a Siberian Husky/German Shepherd mix a couple of months after we had to say goodbye to my lab. I chose to get another Husky because of the experience I had with my first Husky, and seeing another lab around was going to be too hard at that time.

Over the past year and a half, I have been privately training my new Husky with the assistance of the same trainers who run the service dog training program administered by K9s on the Front Line. It was difficult at first to connect with my new dog due to the trauma of losing my lab, but her inquisitive nature and typical Husky demands for my attention have been exactly what I have needed. Her high level of energy forces me to get her out of the house and get exercise I need for improvement of my own health – overall it is working out quite well. We have been waiting for a few months for a service dog training class administered by Service Dog Strong, an organization which was started by another graduate from the K9s on the Front Line program specifically to assist veterans who are survivors of Military Sexual Trauma. I can’t wait to start our class in October, pending funding (funding seems to be more difficult to come by for programs for MST survivors – I think it has to do with the fact that society as a whole still doesn’t like to acknowledge the alarming amount of MST which occurs and the subsequent struggles of “invisible” veterans – our experiences aren’t a “feel-good” cause to support).

I will likely need to restart the reasonable accommodation process for my new job since it is with a different agency, but so far it appears to be an even more inclusive work environment than where I was before, so I remain optimistic. I am also currently looking into ways for my new dog to work with me when I am volunteering with the United States Veteran Reserve Corps and Civil Air Patrol, but I am too early in that research to know whether that will be an achievable training goal for us or not.

I may not have been able to continue my military career, but I still have strong desire to serve my country, and having my lab allowed me to return to federal civilian service and accomplish that goal. I hope to continue on that track as well as participating in volunteer organizations such as VFW (just became a life member this past year), U.S.-VRC, and CAP, hopefully with the aid of my current dog.