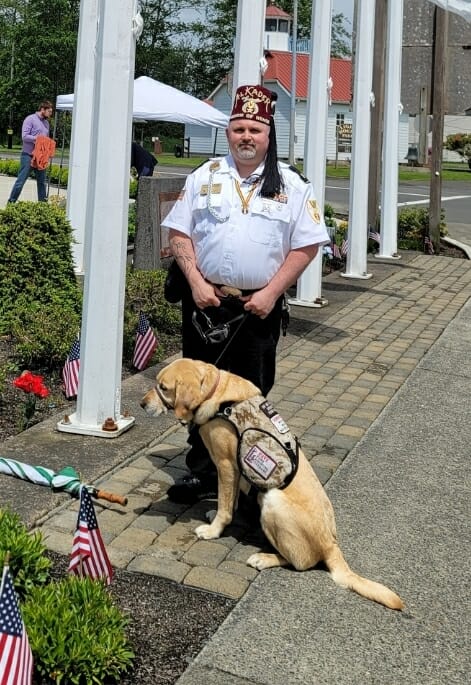 After my time in the Marines I was a federal police officer for the Army. I left law enforcement in 2013. I suffered from severe ptsd, depression and suicidal thoughts. My wife suggested I look into a service dog. I contacted Paws Assisting Veterans and I was approved and was placed with my service dog, Gunner.because of Gunner I am able to be a better person. I am very active in my community with Masons, Shriners, DAV and soon to join the VFW. Without him I wouldn’t be able to leave my house or interact in society. Gunner and I attend the annual communications for Oregon Grand Chapter of Eastern Star where they raise money for Paws Assisting Veterans. We work to bring community involvement and awareness for service dogs and Veterans with PTSD. We have attended functions with the VFW for their annual flag ceremonies and will shortly be joining the post in Warrenton, Oregon.
We are very active in Al Kader Shriners where we attend and participate in parades and help coordinate them. We are also part of Legion of Honor, the veterans organization within the Shriners.

Because my wife and family need me. Gunner is the greatest thing to have happened to me. Without him I would not be able to give back to the community and continue to serve. After 13 years in the Marines and federal law enforcement, serving the community is where my passion lies, and with Gunner I am able to do so.