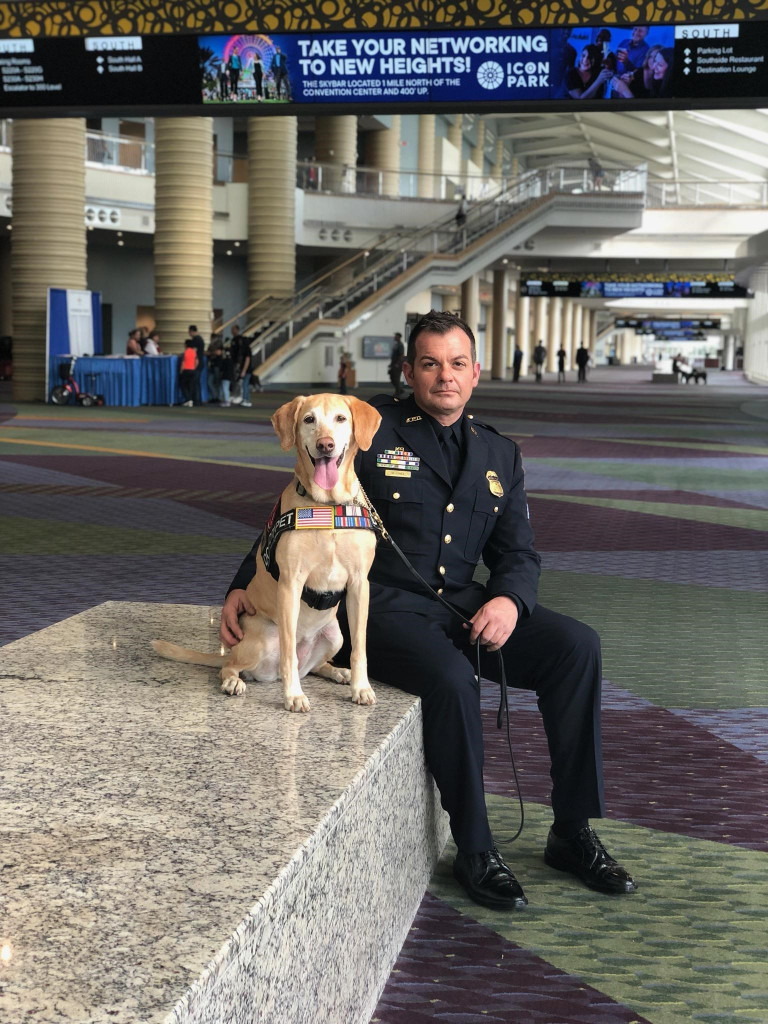 I served in the United States Air Force and retired with 21 years. I was Security Police/Forces during my military career. I served CONUS and OCONUS.

this is the story of my War Dog and Retired Police K9 Summer; and how two Veterans (2 legged and 4 legged became partners)

Summer and I became partners in January 2014 when my German Shepherd Blecky, retired and I needed a new K9 partner from DOD/TSA at Lackland AFB Texas. When I picked up Summer from Dulles Airport late evening, Summer was full of energy. She was sitting in a crate full of shredded newspaper and as soon as I opened the crate door, she came out barreling, being free from the trip up from Texas. We went outside to break her (use the bathroom) and she was continuously spinning and full of joy.

I brought her home and acclimated her with my retired canine partner. I reviewed her medical records and noticed that she was forward deployed with the Marine Corps in Kandahar, Afghanistan in March 2012.

Due to the drawdown of military troops from Afghanistan form President Barrack Obama, Summer was still at a young age for a working dog, so she came back stateside, DOD acquired her and we were partnered together, taking in account my working history and experience with MWD’s.

I immediately reached out to the President of the US War Dog Association, Mr. Ron Aiello. After confirming K9 Summer was in fact in country during the time of war, he presented K9 Summer with the US Military Working Dog Service Award Medal & Certificate (attached). It was a proud moment for not only me but my K9 partner. Through the years that Summer, and I worked together as an explosive detection team, I have noticed that at times when there are loud noises in the environment, Summer trembles and shakes. When she and I were playing in my backyard, a truck was dumping dirt. When they raised the bed to ensure all the dirt exited the back, they slammed the back gate multiple times and I noticed Summer completely shut down. Her tail was tucked underneath her, her ears were pulled back, heavy panting, whale eyes and shaking continuously. I walked up to her, got her toy and waved it in front of her. After a few seconds, she literally snapped out of the stare and began to play again. We continued playing for the next 10 minutes and when an additional dump truck pulled up the site and dumped the dirt out, it again slammed the back door multiple times and Summer displayed the same behavior. This time, she ran between my legs and covered low on the ground.

I took her to the vet the next day, explained the behavior to the military vet technician and she then was diagnosed with PTSD. We believe her reaction to loud noises is attributable to her time served in Afghanistan. As with me, the experiences, and situations she was involved in while deployed overseas, never left her memory. I believe it contributes to her high anxiety she displays to this day.
Having served and received awards and decorations throughout my military career, I made it a point for Summer to receive the recognition she, as a War Dog and a War Veteran, rightfully deserves. With her nose and training, she has saved countless lives and kept morale with the troops deployed overseas. She has successfully found weapon caches, improvised explosive devices, and been involved in firefights. These reasons alone is why she wears the Afghanistan Campaign Ribbon and Global War on Terrorism Service and Expeditionary Ribbons on her vest.

Because MWD’s in the past few years/decade are being recognized away from the handler, I have made it a point for Summer to get the recognition she rightfully deserves. Summer has been recognized from the US War Dog Association to American Kennel Club. Below are the awards and commendations Summer has received:
• Member of the U.S. War Dog Association
• July 2017- PDSA Commendation Award in July 2017 for her unparallel devotion and enrichment brought to all lives that served with her.
• May 2018- Lois K9 Medal of Courage in May 2018 by demonstrating exceptional valor and service to our Country
• July 2018- (USA Today) One of the 25 Most Heroic Dogs in America
• 2019 AKC Award for Canine Excellence (ACE) Uniformed Service K9 Award
• 2021 American Humane Military Dog of the Year
The above-mentioned recognition of Summer does not even amount to the love and respect I have for her. She is a true Hero, war veteran and my best friend. She helps me with my war related injuries and I with hers. They say there’s nothing like the loyalty of a dog and man’s best friend, Summer is the epitome of that quote/saying.

I continue to work/train police dogs because the unconditional love of a dog is true and genuine. Their loyalty is unmatched with any human. From the training prospective, the ability to communicate through body movement and repetition to a dog to do a task is so rewarding. From the Veteran perspective, having a dog to calm you down, to notice when health turns for the worse and in need, is rewarding in itself. Thank you for the opportunity to share my story and how proud I am for my retired War Dog Veteran