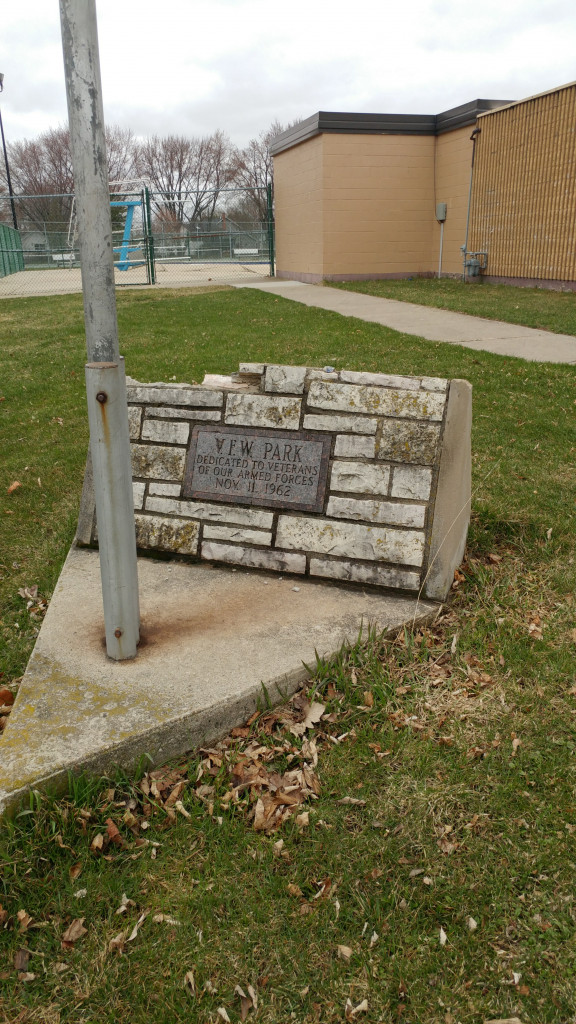 I served in the US Army for 25 years, retiring as a Chief Warrant Officer 5 (CWO5). I earned my VFW membership via 2 tours in Korea. My main job in the Army was as a UH-1 helicopter pilot, flying in all theaters of the world including Europe, Asia, Korea, and in all 50 states.

Picture of the original VFW Park veteran’s plaque attached – this is the one that fell apart when moving it, resulting in the new monument being needed/created.

The story – In 2018 the citizens of De Pere voted to rebuild the swimming pool in the City’s VFW Park. In 2019 during the reconstruction process the workers attempted to move the existing plaque honoring veterans which was originally dedicated in 1962. However. due to it’s age the original plaque was not salvageable. Mary Kosobucki, De Pere Director of Parks, Recreation and Forestry, then contacted VFW Post Commander Pat Moran (SP4, USA, Vietnam veteran) to develop a plan to replace the plaque. Knowing that there was no other veterans related plaque in De Pere, Commander Pat designated Post 2113 Quartermaster Randy Hansen (CWO5, USA, Ret.) as the lead for working in partnership with Mary to create a new veteran’s – “something” – that would become a lasting legacy to all local veterans. Randy designed, not a replacement plaque, but a unique monument that would honor all uniformed servicemen who either directly or indirectly contributed to the successes of our combat forces. In the end, the design Randy created was approved by Post members and the City of De Pere in which the honoring statement on the front of the monument clearly states that the monument honors all, not just the traditional 5 combat forces (US Army, US Air Force, US Marine Corps, US Navy and the US Coast Guard), “Uniformed Servicemembers”.

The monument design was approved and ordered in February 2020 with a planned install and dedication ceremony date of Veterans Day 2020. Next thing that happened was COVID – resulting in a 1 1/2 year delay in getting the grant stone delivered from overseas. The grant stone was finally received by Matthews Monument (New London, WI) who produced the monument we see today, delivering and installing it in May 2022. The dedication ceremony took place on June 30, 2022.

1. The brand new combat branch of the US Space Force – which when created was comprised of combat veterans of all the other five branches of service.

2. The US Public Health Service (USPHS) – whose combat support missions included their doctors and nurses being on the WWII D-Day invasion fleet where they treated the many hundreds of wounded evacuated off the beaches and treated the thousands of wounded forces of Allied invasions across the world. Their efforts must be and therefore are honored in this monument.

3. The National Oceanic and Atmospheric Administration (NOAA) – whose WWII combat support missions included producing the over 100 million maps and charts that all Allied combat forces used. NASA officers served in WI as artillery surveyors, engineers and intelligence officers in all the theaters of operations. Plus, NOAA personnel were among the very first POW’s of WWII when they were captured by Japanese forces in 1941 in the Philippines. Their efforts must be and therefore are honored in this monument.

4. The US Merchant Marines (USMM) – These sailors are the true unrecognized hero’s of WWII. Their mission then and today is to “carry wartime supplies (beans, bullets and fuel) and personnel to each and every conflict zone around the world.” During WWII a total of 733 unarmed Merchant Marine cargo ships were sunk, resulting in the death of 1 of every 26 Merchant Marine sailors – the highest death rate of any of the other actual U.S. combat branches of service. The Merchant Marine fleet is the most critical element of our nation’s ability to project military power overseas. Their efforts and huge sacrifices must be and therefore are honored in this monument.

Post Commander Pat Moran “This new monument allows the citizens of De Pere to recognize that the uniformed servicemembers being honored today are truly their brothers, sisters, cousins, mothers, fathers, grandmothers and grandfathers. By recognizing that, it is our hope that they’ll be in a better position to help with local Veteran support outreach programs and events that serve veterans and their families in need.”

Post QM Randy Hansen “As far as we know this is the first such monument in the entire U.S. that acknowledges the sacrifices of the uniformed servicemembers who toil away (and die) behind the scenes to ensure my combat brothers and sisters in arms can successfully complete our wartime or peacetime missions.”

Keynote speaker Major General (MG) Dan Ammerman, USA, Ret. – “These men and women are worth far greater recognition then mere words, markers or monuments. The sacrifices they made and the deeds they performed shall be written in history, and shall remain alive in our memories for generations to come. In dedicating this monument we express sincerely our pride and gratitude for the tasks they fulfilled.”

The quote from VFW Post 2113 Commander Pat Moran best sums up why we do this “This new monument allows the citizens of De Pere to recognize that the uniformed servicemembers being honored today are truly their brothers, sisters, cousins, mothers, fathers, grandmothers and grandfathers. By recognizing that, it is our hope that they’ll be in a better position to help with local Veteran support outreach programs and events that serve veterans and their families in need.”