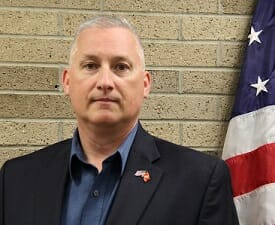 I retired from the Marine Corps with the rank of Colonel after 30 years of Active and Reserve service as an Aviation Command and Control Officer (MOS 7202) and Civil Affairs Officer (MOS 0530) assigned to duty locations across the country, aboard US Navy ships, to NATO nations, Okinawa and the Republic of Korea. I was deployed to Ramadi, Al Anbar Province Iraq in command of 4th CAG Detachment 4 Governance Support Team at the Provincial Government Center in Ramadi from September 2006 to April 2007.

In addition to active roles at my VFW Post where I am concluding 4 consecutive years as Post Commander (2018-2022) I am an elected Trustee on the Linden Community Schools Board of Education where I have been serving 14 years to date with 9 years as Board President and 2 years as Vice President. I’ve been an active participant often fulfilling leadership roles on formal and ad hoc committees supporting school boosters and parent organizations, civic activities, my church and with my employers Veterans Initiative Program. I volunteer as a guest speaker on veteran’s related topics for the schools as well as a Public Address Announcer for varsity athletics which totals in excess of 100 service hors per year in that capacity.

I chose a career in the military as I saw it as the highest calling to serve our nation and its ideals as envisioned by the founding fathers. I have always considered that the greatest impact we can make in life is interacting positively with those immediately around us and improving the situation in our own communities by contributing our time and our talents at the grassroots level. We owe it to those who gave their last full measure in service to our country to demonstrate the commitment our service men and women have after our years in the military have ended. What others see in our actions reflects directly on our military, our comrades in arms and our VFW organization and encourages others to act where they otherwise may remain complacent.