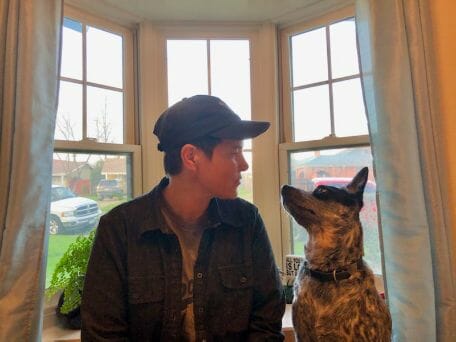 USN Aviation Powerplant Technician from 1989-1999 “jet mechanic”; Deployed to the Philippines following 1989 coup; one of the first women to serve aboard the Aircraft Carrier USS Lincoln when women were “allowed” on combat ships in support of Operation Southern Watch and Vigilant Sentinel following the Gulf War, deployed to Misawa Japan in 1996 and 1998. Finished my career with the Navy after having done 2 voluntary stints in rehab for alcohol dependency, then joined USAR in order to help others instead of fixing broken aircraft from 1999-2012. Deployed to Iraq from 2003-2004 as a Combat Medic/Mental Health Specialist. Retired SFC as a Career Counselor in 2012 due to medical and was no longer qualified to reenlist.

I have had Maggie for almost 4 years now working with homeless veterans in the Sacramento area. We are together at outreach events, case managing, homeless veterans, providing resources, and she hangs out with me in the office greeting all who come into the program. She makes it possible to continually engage in areas that could possible “trigger” me when working in the population I do. She “brings” others closer when I’d rather avoid someone, and allows me to stay connected to the community. She also knows when I’m unable to sustain the engagement and encourages me to retreat a bit. Maggie has brought the entire office to my door and everyone who needs that dog touch, will come hang out and get their “fix”. We are the comfort office, and troubles are shared and hopefully minds are put more at ease.

I was medically denied reenlistment after 22 years but I was not ready to leave the service and wanted to continue working with veterans in some capacity. Maggie has helped me carry that mission out and allows me to stay engaged when I’d probably rather be in seclusion with my own little thoughts. This career is not a “selfless” service…this is completely “selfish” in that my work gives ME the support I need, by helping others, and Maggie is my greatest tool that allows that.