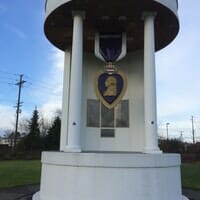 Keith Mathews served in Vietnam and Iraq; US Navy.

VFW Post 1949 gets City to designate itself a Purple Heart City.
By Ken Norling, and William Steel

During the early summer of 2020 after informing the Enumclaw City Council of plans to bring the Vietnam Moving Wall to Enumclaw, VFW Post 1949 member Keith Mathews (Purple Heart recipient) suggested that the City proclaim itself a Purple Heart City. This was easily accomplished, especially since the City had only a few years previously cooperated in backing VFW Post 1949 plans to develop a memorial park for local Purple Heart Veterans.

Enumclaw Veteran’s Memorial Park was designed and built between 1995 and 1997 by members of VFW Post 1949, along with the city of Enumclaw, and private donations. The Memorial has the names of 90 area residents who have received the Purple Heart. Veterans’ Memorial Park Purple Heart Monument honors area residents who were killed in the line of duty during the four wars in which the United States was involved during the 20th Century.

In late December 2020 signs designating the City of Enumclaw as a Purple Heart City were installed along the highways into the community of Enumclaw.

Keith Mathews likes giving to veterans in order to better their life.