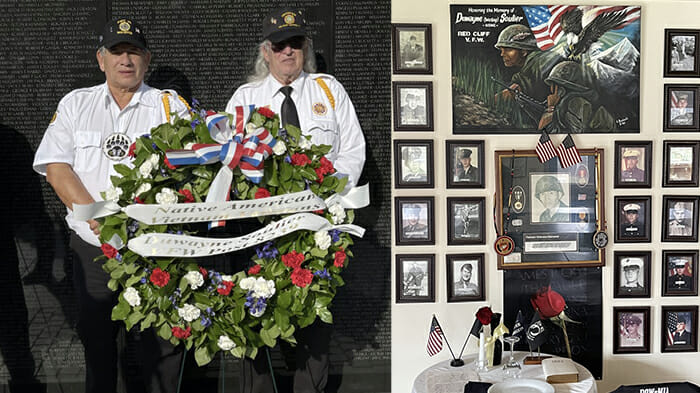 On May 1, 1967, Marine Corps Private First Class Duwayne Soulier was killed while serving in Vietnam. In addition to being a service member, Soulier was a member of the Red Cliff Band of Lake Superior Chippewa.

After Soulier’s passing, VFW Post 8239, which sits on the Red Cliff Indian Reservation near Bayfield, Wisconsin, was named after him to honor his service and sacrifice. Many of its members, both past and present, are Native American. In addition to traditional honor guard services, the Post also holds services to celebrate its local heritage.

“We perform honor guard services for cultural events like pow wows and other tribal ceremonies,” said Post Commander Alan “Butch” Kuepfer. “The gratitude shown by veteran families and community members is beyond words.”

After Native American Army Master Sergeant Jonathan J. Dunbar was killed in Syria in 2018, the Post performed military rites at his memorial ceremony, and he was made an honorary Post member.

And just last month, Kuepfer, along with fellow Post member Rick Peterson, traveled to Washington D.C. to lay a wreath in honor of Native American Vietnam War veterans at the annual Vietnam Memorial ceremony on Veterans Day. They were joined by American Legion Army veteran Robert Blanchard, who recently lost his cousin, a Native American Vietnam veteran, to cancer caused by exposure to Agent Orange.

“As a Native American Vietnam veteran myself, I understand the sacrifice Native Americans have made to our military and country — not only in Vietnam but throughout history,” said Kuepfer.

“It was a proud, yet humbling experience to lay the wreath during Native American Heritage month.”

Regardless of the activity, Kuepfer and other members of Duwayne Soulier Memorial VFW Post 8239 are #StillServing in countless ways, cherishing each opportunity to lend support and celebrate local heritage. “Some of the most gratifying and rewarding things we do as VFW members are to continue to serve veterans, families and our community,” said Kuepfer.