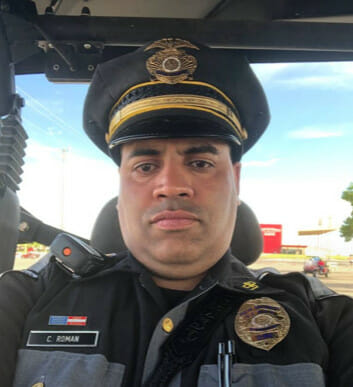 After serving for 15 and a half years in the U.S. Marine Corps, Christian Roman knew the rest of his life would be spent helping others.

A career in law enforcement seemed like a natural fit to find purpose and opportunities to make a difference. For Roman, it was also a way to honor his mother and the officer who assisted her when she suffered injuries from a boyfriend who became violent.

“The detective searched and searched, gathering information on the guy’s past behaviors and record. After locating him, the officer followed through step by step and the man was convicted to 12 years in jail,” Roman recalled.

“He let my mother know she was safe from fear … I wanted to do that for someone else who might need that same justice.”

Roman, a member of VFW Post 5890 in Rio Rancho, New Mexico, is now a senior patrolman with the New Mexico State Police. Over the past seven years, he has accomplished what he set out to do — use his military training to continue serving his fellow citizens and help them in times of need.

One case that stands out was the chance to care for a family similar to how he and his mother were protected. A woman reported a domestic violence incident and stated her intoxicated boyfriend had abducted her young sons. Roman was proud to be part of the team that tracked the man down using cell phone location and found the children who were just one and four years old.

“I’ve also assisted with providing the homeless with jackets, gloves, blankets, socks and clothes for the winter to prevent any cold weather exposure deaths,” said Roman.

“This means a lot because it’s helping veterans. They make up the largest percentage of homeless here in McKinley County.”

The variety of each day is something Roman appreciates, and he takes satisfaction in knowing that what he does makes life brighter for those he serves. He understands how important that is, no matter the circumstances.

“I have joy when you find a missing person and see the happiness the family has because their family member is back,” Roman said.

“But even when there’s bad news you have to tell a person, when you say you’ll do your best to investigate thoroughly and they see that you mean it and do what you promised, they feel better that you did that for them.”

Roman and his wife, who also is a Marine Corps veteran, look for ways to provide a positive example for their children and benefit other kids in their community. They coach little league baseball and softball and mentor a child through a nonprofit program. They enjoy teaching kids how to be safe and care for each other and their families, and Roman believes it’s another chance to be there for the people around him.

“There’s an anonymous quote that speaks to my life: ‘Don’t feel bad if people remember you only when they need you, feel privileged that you are like a candle that comes to their mind when there is darkness,’” said Roman.