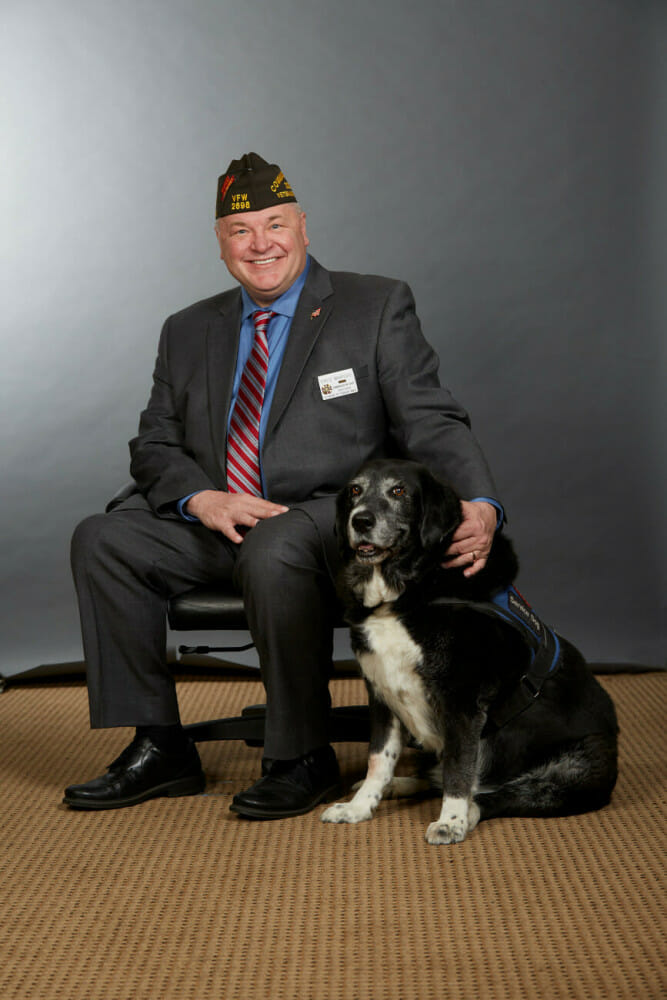 If you are familiar with former VFW Commander-in-Chief Matthew “Fritz” Mihelcic, there is a good chance you are familiar with Mama Cass, too. She was Mihelcic’s service dog. Last month, Mama Cass passed away peacefully after a brief cancer battle — but not before making a lasting impact on the veteran community.

Mihelcic and Mama Cass’ special bond was evident. The loyal service dog accompanied Mihelcic on his travels and to events — she even appeared alongside the former Commander-in-Chief in his official VFW photo. Together, they helped remove stigmas surrounding Post-Traumatic Stress (PTS) and other mental health conditions.

“By having her in my photo, we showed everyone that you can have PTS and still accomplish great things,” said Mihelcic. “We met many people who told me that because of us, they saw that they too could be productive; that they weren’t damaged.”

Mihelcic understands how difficult it can be to work past feelings of self-doubt, anxiety and fear after serving — and how important it is to seek support. Like so many others, he struggled for years before being partnered with Mama Cass.

“It took me over 20 years to get to the point where I was ready for that,” he explained. “I went through the usual issues of a veteran coming home. I had to work through the many stages of that with therapy, medications and working on myself.”

With Mama Cass by his side, Mihelcic became better equipped to continue his journey to becoming whole again. As he described it, she gave him a longer leash to be more comfortable out in the world and get to where he needed to be.

Since her passing, Mihelcic has received an outpouring of support and heard stories about how Mama Cass helped others, too.

One veteran named Ryan wrote, “Mama was more than just a service dog for Fritz. She was a service dog to us all. She helped break not just barriers but the stigma of veterans suffering from PTS, including myself.”

Others shared similar messages with Mihelcic, explaining that seeing him and Mama Cass motivated them to find support in their own battles with PTS.

“I know that we helped many people come forward and get the help and assistance they needed,” said Mihelcic. “Mama’s legacy will live on in the people she touched. Even in death, she is #StillServing.”