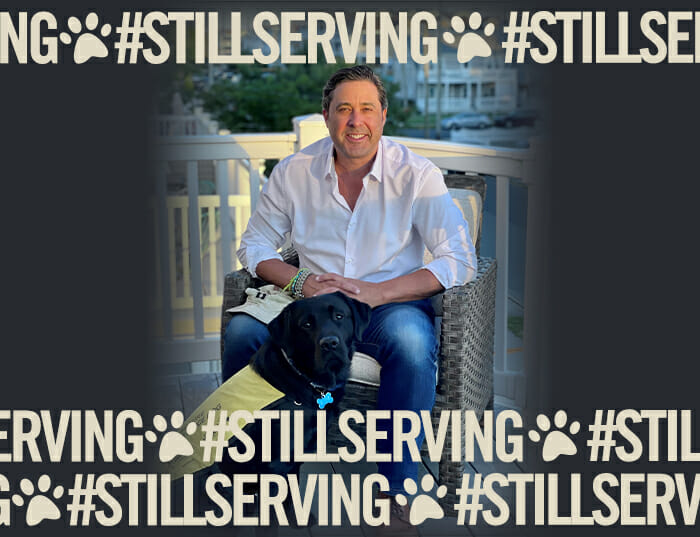 Early in the pandemic, veteran Colin Ratner and his wife Cindi decided to take on a new challenge. Since the summer of 2020, they and their two daughters Alexandra and Madeline have been raising Hero, a black Labrador belonging to the Guide Dog Foundation.

A combat medic in the Army Reserves, Ratner served a tour in Afghanistan and retired as an Army Captain and Company Commander. Following service, his desire to help others remained.

“I left the military in 2005 but still strive to serve,” he said. “My wife is a Physician’s Assistant in the Emergency Department and serves others every day as a frontline hero.

“We’ve always donated our time and money to charities,” Ratner explained. “This time, we wanted to give back in a more tangible way and teach our daughters the power of truly getting involved.”

As puppy raisers for the Foundation, the Ratner family is grooming Hero to become a specially trained service dog.

“We’re doing our best to raise Hero so he can help someone who needs him,” said Ratner.

The family received eight-week-old Hero last July. In just a few months, he will graduate to formal training and move on. Ratner knows it will be a hard goodbye, but his family is heartened to know the impact of their efforts.

“Hero is an amazing dog, and we know it is going to be difficult to part after more than a year,” he said. “But we also know he is going help to someone in need.

“This process has been inspiring for us all and is something we will always cherish,” he said. “It’s how we as a family are #StillServing and paying it forward.”

If you’re a veteran who is #StillServing with your special dog, share your story at todaysvfw.org/stillserving-dogs.