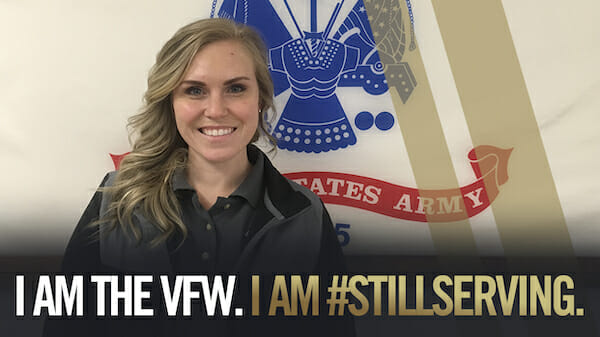 Stacey Roberts is #StillServing as a VFW Life Member and Post Commander at VFW Post 3701 in Lakeview, Michigan. Roberts grew up nearby and a former Commander of Post 3701 was a neighbor. As a kid, she had no idea she would later save the Post from closing.

Roberts served with the Michigan Army National Guard for six years. She kept in touch with the Post, even while serving overseas, and got more involved once she was back in the area and attending college. Roberts moved away for three years and returned to find the Post was struggling financially, had little member participation and a meeting was scheduled to likely close the Post.

“I attended this meeting with a fellow veteran and childhood friend and we asked for the chance to try and turn the Post around. I worked hard to recruit comrades I served with, and within a year we were out of debt and thriving again,” recalled Roberts.

“Four years later, we’re very active in our community and continuously raising money through fundraisers and events. We have the most wonderful camaraderie with members from every era. And we are purchasing a new building that is double the size, in the heart of our community and will free us from constant repairs.”

Since the fateful meeting in 2017, Post 3701 has earned All-State each year. The Post and members have received numerous honors from the VFW Department of Michigan, and Roberts and the Post’s Quartermaster have both served as National Aide-de-Camp and sat on committees at the VFW National Convention. Roberts is grateful for the many people who have rolled with change and given her the chance to realize a new vision for the Post.

“We can’t thank our community enough for their support as we have tried new events, fundraisers and are now relocating to the heart of town after 50 years in the same building,” Roberts said.

“The cards we receive from families of past members thanking us for keeping the Post going or from families after providing a funeral service mean more to us than they can imagine. We don’t do it for the thanks, we do it because it’s the right thing, and someday we’ll need future generations to step up when we can no longer do it.”

Roberts is proud of the turnaround effort and her roles in every level of the VFW. She also appreciates the opportunity to serve in her community and help veterans in central and western Michigan. This past year, she was able to quickly mobilize Post 3701 and Auxiliary to make face masks and host blood drives during the pandemic. She volunteers with the county Veterans Advisory Board as well.

“Veterans helping veterans just makes sense…There are things we have learned and experienced that only fellow veterans can understand,” said Roberts.

“Joining the military is like gaining an entire family and after enlistment, there is a definite void. Helping fellow veterans is incredibly rewarding, but more so, I get my military family back and I have to thank the VFW for that.”

Roberts is committed to doing her part to see the work of the VFW continue and can’t imagine having it any other way.

“I am the VFW because I had support from my local Post while serving and today’s service members deserve the same. The fight for freedom never ends and our support of that shouldn’t either.”